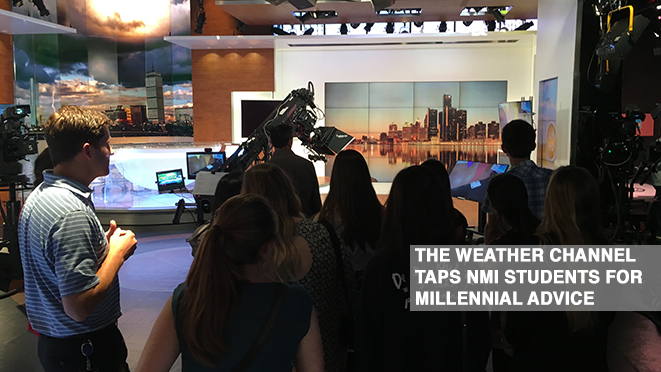 Like the weather, it’s hard to forecast the outcome of a special project at the beginning of a semester-long class. However, for the students in the New Media Institute special topics class on new media photography, the outcome of a new project with The Weather Channel (TWC) has exceeded expectations.

In collaboration with TWC, the NMI students were tasked with providing feedback and serving on a beta team for a new user-generated content initiative that TWC is developing called FieldPro. When released to a national audience, the campaign will harness pre-identified weather enthusiasts from across the country to report on, and submit visuals of, weather events through local coverage.

The students have had five face-to-face feedback sessions with TWC coordinators, including two visits to their offices in Atlanta. A lot of feedback has been shared via email, as well.

“I think it’s really, really valuable for the students because they are able to witness and participate in the development, from scratch, of a new photo community and that’s really exciting,” said course instructor John Weatherford, a lecturer in the NMI. “The students are excited because it’s real, applied experience that can go on their résumé.”

The students began the semester with instruction of the technical knowledge and applications of social media photography ranging from taking pictures on their smart phones, to learning about 3D photography and drone photography. They then started working on the case study of how to build a sharing platform around photography, and how to best tell the weather story through visuals.

The goal for TWC is to engage the NMI students to provide feedback on many aspects of the project ranging from how they consume media to what kind of videos they watch and feedback on how TWC can make a mobile app work financially.

“I think the Grady opportunity worked well for us for a couple of reasons,” said Stephen Neslage, a senior coordinating producer at The Weather Channel and liaison of this project. “First, these students are the demographic that we want to appeal to, so to be able to work with them as a research and development team to understand how they consume media and how they consume their information is a big advantage. Then if they send us photos and information from a weather event, we need to understand what would be the most convenient way to do that.”

In addition to the experience the students are getting as members of the beta team in submitting content and providing the best-quality visuals, they have also provided feedback on topics ranging from the appearance of marketing platforms to how to make a business model that is financially feasible.

The most important question TWC is trying to answer is what content resonates with the millennials.

“Regardless of the platform, content is always king,” Neslage told the students during a recent session where he quizzed them on the five critical elements of shared videos.

The project with the NMI students has met and exceeded expectations.

“The project has been much better than expected,” Neslage said. “They have helped us build a requirements list about what features we need to build a mobile app to take FieldPro to a broader audience. Their feedback has been phenomenal. Their direct feedback is being incorporated into our app requirements. They told us things we would not have known otherwise.”

The students have valued the experience, too.

“It’s been a really exciting class,” said Chalen Duncan, an NMI and School of Public and International Affairs student. “I’ve gotten to know a lot, not only about photography but it’s also been great to work with The Weather Channel to see how they are building these applications from the ground up and get a more real-world experience.”

“Working with The Weather Channel, I have been able to see how they have approached this idea, who they are bringing in to work on it and even what it will cost,” Selby said. “I think it's important to understand this type of process so that when you may have a big idea of your own one day, you can present it and work through it knowing more about the details and the process of putting a new idea into action.”

Michael Butler, a 2012 graduate of the atmospheric sciences certificate program at UGA and a meteorologist at TWC, has also been working on the program and has been meeting with the students. “I would have loved to have had this kind of company come in to work with me when I was a student and get that real-world experience of an internship right here at my own school without having to leave.”

“At the end of the day, it’s so much different than being in a classroom and listening to lectures,” Duncan concluded.