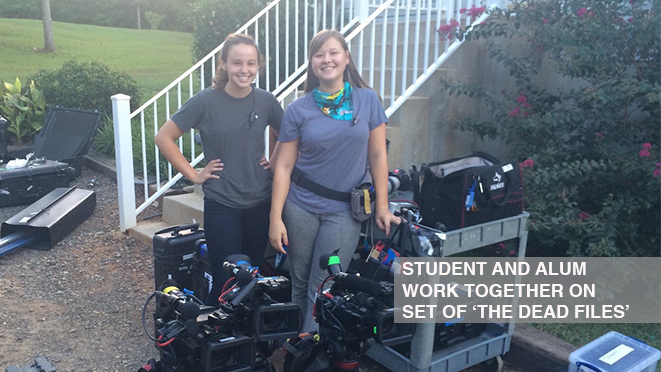 A senior mass media arts major recently had the opportunity to work alongside a Grady College alumna on the set of the Travel Channel's “The Dead Files.”

James Biddle, a senior lecturer of telecommunications, connected Becca Bennett with Megan Mitchell (ABJ '08) when he learned the series was to shoot an episode in Macon, Georgia, this past September. Mitchell currently works as a camera assistant for the show.

“We hire a gear production assistant to help me in every city,” Mitchell explained. “So I reached out to Professor Biddle to see if he had any previous students who might be qualified/interested in the position.”

Though she had to take a few days off of school, Bennett jumped at the chance.

“I learned so much throughout the week,” Bennett said. “I was in charge of transporting equipment, loading the cargo van and helping with whatever else needed to be done on set.”

She continued, “I got to really see the process of making a TV show like that, and got so much hands on experience.”

On the job, Bennett was able to apply the skills she learned from two of Biddle's upper-level courses.

“I think many on set were impressed with the vocabulary I knew and my familiarity with some of the equipment,” she said. “It was a great experience!”

Mitchell described Bennett as a fast and enthusiastic worker, easily able to conquer the physical demands of the position. “By the end of the week she became one of our favorite [production assistants] we have ever hired.

“I know that, because of Rebecca and myself, my crew thinks highly of the graduates of Grady,” Mitchell said. “They all were surprised that two hardworking females in a very male-driven part of the TV/film production business came from the same school.”