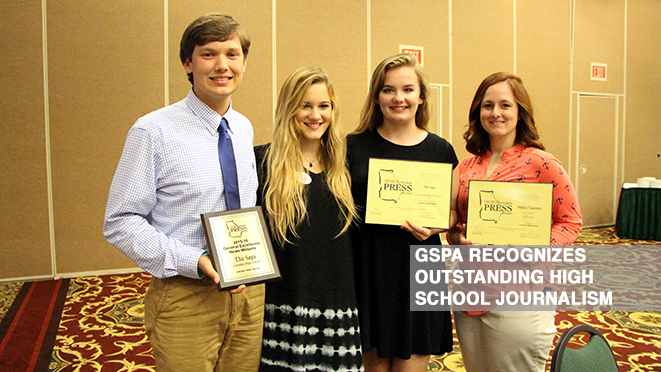 Recognizing the best in high school journalism throughout the state, the 2016 Georgia Scholastic Press Association (GSPA) Awards were distributed April 14, 2016, at the Classic Center in Athens, Georgia.

“This year’s contest—judged by a wonderful team of journalists—recognized some of the very finest student journalism in Georgia,” said Charles Davis, dean of the Grady College of Journalism and Mass Communication, the home of GSPA. “The contest always reminds me that the future of journalism remains bright in these rapidly changing times, and inspires all of us at Grady College to work that much harder at training the next generation of communicators.”

GSPA holds its annual General Excellence competition each spring and distributes the awards during a banquet, which was held at the Classic Center. This year, Grady College seniors Damian Reynolds and Teman Worku, and Ola High School senior Ashley Soriano gave motivational and inspiring speeches to the more than 200 students and teachers in attendance.

“I always tell people that if you’re not contemplating dropping out once a week, then you’re not being challenged hard enough,” Reynolds said, when speaking of his experience at Grady College. “I can say the nation’s No. 2 journalism school earned its reputation. Sometimes the only person who believed in me was the person staring at me in the mirror. Sometimes in life, that’s all it takes.”

This year, 33 publications entered the competition in their respective categories: newspaper, newsmagazine, news website or TV news broadcast. Entries are judged by experienced journalists, Grady College faculty and staff. The top publications earn “General Excellence” status, and from those, one “All-Georgia” award is chosen in each category.

Teirnan O’Neil of Clarke Central High School was chosen as the “Georgia Champion Journalist,” GSPA’s award for the state’s top student journalist. O’Neil serves as the editor in chief of his school’s publication, The Odyssey Online, where he leads a staff of 25 students to produce the award-winning website. He isn’t afraid to tackle big issues in his coverage, whether writing a hard-hitting column-complete with interviews of administrators about the school’s dress code; writing a long form, gonzo-style piece on a local community shelter; or covering the Athens Jewish Festival for the school’s broadcast. Through his tenure at The Odyssey, he has won several awards for his writing and has complimented his journalistic leadership with several extracurricular pursuits, including participating on the mock trial team, serving as a co-captain of a state champion academic bowl team and competing as a member of the cross country team.

“I think winning Georgia Champion journalist served as a marker for how far I’ve come,” O’Neil said. “When I first joined the Odyssey staff second semester of my freshmen year I could barely sit in one place for 30 minutes without running off, or acting like a chicken with its head cut off, so I think that through this program, and through journalism, I’ve really been able to mature as a person, a leader and a writer.”

“I am extremely humbled to have won this award and I know that I couldn’t have won it without the great support from the editors I’ve had, as well as the invaluable mentorship from Mr. David Alan Ragsdale.”

Nikky Vannoy, adviser of The Saga at Lowndes High School in Valdosta, earned GSPA’s “1st Year Adviser” award, for helping change the focus of the content of The Saga to the school and community. Furthermore, she lobbied to get the print edition of the newspaper resurrected.

Nikky stated: “As a first year adviser, I wasn't really sure the path we needed to take to be a scholastic newspaper. We started in the fall just hoping to get a couple of editions printed before the end of the year. At this point we have printed four editions and plan to print two more before the end of the year. We received a lot of criticism from the judges on our print newspapers. We plan on closely examining the weak points in the print versions and improving for next year.”

In addition to overall publication awards, GSPA distributed more than 80 individual awards in 30 different categories, recognizing the best individual journalistic pieces from students in categories focusing on writing, photography and production. A full list of winners is available online at www.ugagspa.org and the bi-monthly GSPA newsletter.

Founded in 1929 at the University of Georgia’s Grady College of Journalism and Mass Communication, GSPA serves more than 800 high school journalism teachers and students throughout the state through conferences, workshops, publications and its annual awards competition.