Ken Woo has been involved with 15 Olympic Games and in 2019, he was inducted into the Sports Broadcasting Hall of Fame. He will be inducted into the Grady Fellowship this year. (Photo: submitted; Graphic: Allison Chenard)

Video credit: Atlanta Image Arts
Ken Woo has taken the basic skills he learned in film making, photography and editing at Grady College and created an incredibly varied background in his nearly 40 years of serving as director of photography, cameraman and documentary producer.

“I learned a lot of the basics that I still rely on today in photography, film making, editing, writing, and most important, storytelling,” Woo, a journalism major, said. “The technical knowledge I learned about photography applies to all cameras that I work with even with today’s digital equipment, as well as the editing techniques I developed.” 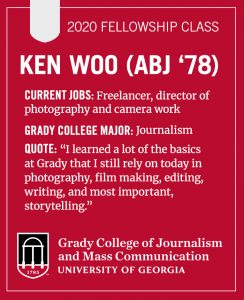 Woo has an enduring work ethic, something that started when he was in college working in the college’s audio/visual department and bar tending at night. Woo was also a writer and features editor for the Red & Black and a disk jockey for WUOG where he played alternative music and fusion jazz from midnight until 3 a.m.

“The writing I did for the Red & Black and the on-air work I did at WUOG gave me a great insight into a broader knowledge of media that was an important foundation to the work in TV and film that followed,” Woo said. “I especially loved doing the late night radio shows with WUOG. Having a faithful audience that I built up over the course of my stint there was really cool and gave me a lot of confidence.”

Following graduation, Woo’s big break came at CBS where he worked numerous shows like the “Young & the Restless,” “Bold & the Beautiful,” “Price Is Right,” “Archie Bunker’s Place” and “Mama’s Family.” He also worked on freelance shows such the Grammys and Emmys.

In the miscellaneous broadcast category, Woo was one of four cameramen hired by Lionel Ritchie and Michael Jackson in 1985 to shoot the music video “We Are the World” for HBO.

“What a totally amazing night that was,” Wood said.

In 1987, Woo turned to full-time freelance work focusing on live sports, news magazines, documentaries and features. Woo became a director of photography in the early 1990s, working on everything from the Olympic Games, IronMan and Tour de France to several Super Bowls, Final Four Championships and several US Open tournaments for tennis and golf. In total, Woo has filmed 15 Olympic Games.

Woo’s hard work has paid off with accolades through the year. He has 27 Emmy Awards, including three prime time Emmy’s for the Opening Ceremonies at the Salt Lake City, Torino and Beijing Olympic Games and a Peabody Award for his work on ESPN’s “30 for 30” series. In 2019, Woo was inducted into the Sports Broadcasting Hall of Fame.