Allison Ausband has worked at Delta Air Lines for 35 years and serves on the University of Georgia Foundation Board of Trustees. (Photo: submitted; Design: Allison Chenard)

Allison Ausband continues to use skills she learned when she was a Grady College journalism student. 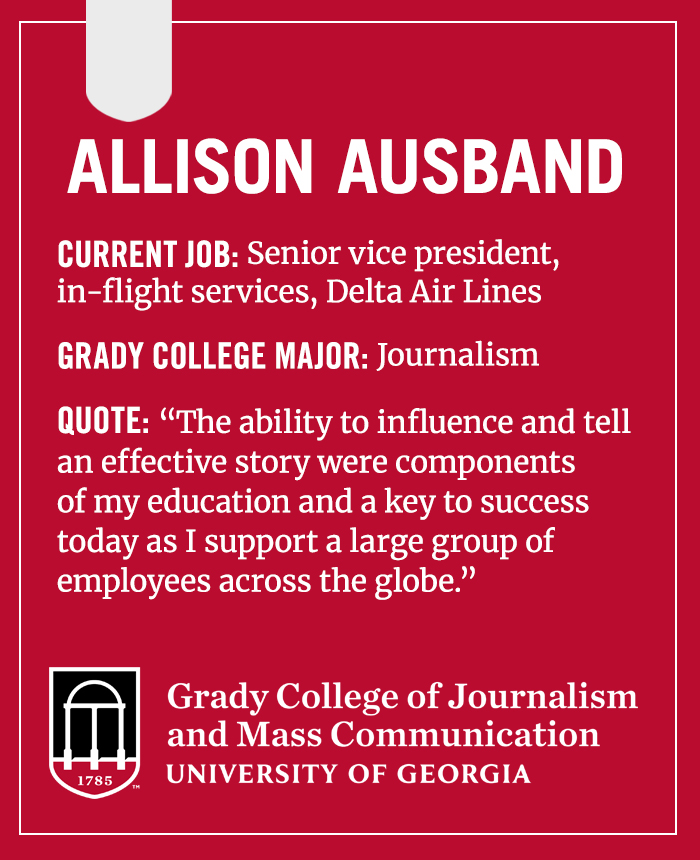 “I use my education and the skills that I learned at Grady on a daily basis in my 35 year career at Delta,” Ausband said. “From the writing skills, to presenting in front of large audiences, to communicating more effectively, there is no doubt in my mind that these skills have helped propel me into my current position.”

Ausband is one of six people who will be inducted into the 2020 class of Grady Fellows, a recognition honoring friends of the college whose accomplishments, friendship and service to the industries they serve have made a positive impact on the college and its students.

In Ausband’s current role as senior vice president – in-flight service for Delta Air Lines, she leads a team of more than 26,000 flight attendants, supervisory and support personnel around the globe, as well as Delta’s onboard global food and beverage operation and experience.

Her key responsibilities include leading her team to ensure 200 million Delta customers have an enjoyable flight experience while maintaining a focus on safety.

Ausband started her career at Delta in 1985 as a flight attendant, and has assumed increasingly more responsibility over the years. She has been instrumental in Delta’s growth, directing projects like the launch of Delta’s social media customer service model as well as a home-based employment program that creates a new virtual workforce culture yielding more than $2 million in savings each year.

In 2019 and 2020, she was named one of Atlanta’s most powerful business leaders by Atlanta Magazine.

Currently, Ausband is Delta’s executive sponsor for the fight against human trafficking through her role on the Georgians for Refuge, Action, Compassion and Education (GRACE) Commission. Under her leadership Delta has won Humanitarian of the Year Award by United Nations and was awarded “Strongest Global Campaign Fighting Trafficking” by Reuters in 2020 Stop Slavery Awards. She also leads Delta’s annual Breast Cancer Research Foundation campaign, which raised over $2 million dollars in 2019. She is a University of Georgia Board of Trustee, serves on the Board of Directors for Delta Community Credit Union and is on the Board of Trustees for the William R. and Sara Babb Smith Foundation. She is also an active member of her local church serving on the personnel committee.

Editor’s Note: This profile was originally published in 2020.

The Fellowship induction, along with recognition of the 2020 Alumni Awards, will take place virtually on April 16, 2021 on our YouTube and Facebook pages. Visit our Grady Salutes webpage for the latest updates.