Prior to his retirement, Chris Clark was one of the longest serving anchors for the same television station in the country. (Photo: supplied; Graphic: Allison Chenard)

Anyone who has lived in middle Tennessee from the mid-1960s to 2007, probably knows the name and face of Chris Clark. Clark was the lead news anchor at WTVF in Nashville, a station he joined in 1966.  He retired in 2007 after 41 years, making him one of the longest-tenured anchors in American television history. 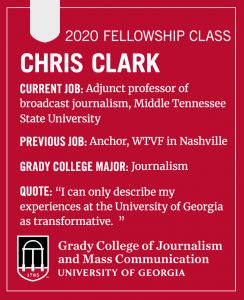 Today, Clark is an adjunct professor of broadcast journalism at Middle Tennessee State University.  In 2007, he was appointed to the Seigenthaler Chair of Excellence in First Amendment Studies at the university, leading to his current position as adjunct professor.

Clark is one of six people who will be inducted into the 2020 class of Grady Fellows, a recognition honoring friends of the college whose accomplishments, friendship and service to the industries they serve have made a positive impact on the college and its students.

“I can only describe my experiences at the University of Georgia as transformative,” Clark said.

In addition to his journalism studies, he was on the debate society, Gridiron Secret Society and ATO fraternity. He also worked part-time at an Athens-area radio station.

“The owner of the station, H. Randolph Holder, became one of my mentors second only to my favorite professor, Worth McDougald,” Clark said. “Worth was such an influence on my professional development that when I started teaching at Middle Tennessee State University, I modeled my teaching style on his.  Without Worth’s influence and wise counsel, I doubt I would have been as successful as I have been. He had a way of inspiring students to be their best.”

A native of Atlanta, Georgia, Clark worked in his hometown as a reporter and anchor following graduation and before transferring to WALB-TV in Albany, Georgia, to serve as news director and anchor.

In the earlier years of joining WTVF, Clark also served as the station’s news director, leading the station’s conversion from film to electronic news coverage, among the first to convert to what is now the broadcast standard throughout the world. It was also during this time that Clark hired a 19-year-old named Oprah Winfrey as Nashville’s first African-American female anchor.

Clark has been active with the Nashville Rotary for several years and has served on numerous boards and committees including the national board of the Associated Press Broadcasters Association and the national board of the Radio and Television News Directors Association. In 1993, Chris was awarded an Emmy from the Middle Tennessee chapter of National Association of Television Arts and Sciences for lifetime achievement in broadcast journalism.  The Associated Press also presented him with its “Broadcaster of the Year” award.  Chris has been awarded several other Emmys for his reporting.

Editor’s Note: This profile was originally published in 2020.

The Fellowship induction, along with recognition of the 2020 Alumni Awards, will take place virtually on April 16, 2021 on our YouTube and Facebook pages. Visit our Grady Salutes webpage for the latest updates.