"If there is one thing I learned at Grady, it’s that accuracy and truth matter," Carol Ramos said. "It’s a message that I am proud to say resonates in Grady classrooms today." Ramos and her husband, Dick, will be inducted into the Grady Fellowship April 16, 2021.

Carol Ramos Helton is equally at home in front of a radio microphone, a television camera or in front of a menagerie of animals who live on the farm in Illinois that she manages with her husband, Dick Helton.

Carol and Dick, who spend part-time at the farm but call Los Angeles home, will be honored as inductees in the Grady Fellowship. 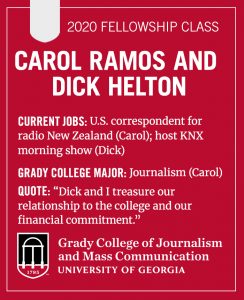 “Dick and I treasure our relationship to the college and our financial commitment,” Carol said.

Carol, a U.S. correspondent for radio New Zealand, and Dick, host of the KNX morning show in LA, have each earned strong reputations in radio and television broadcasting that have resulted in several Emmy and Golden Mike nominations and awards.

Prior to working in international radio, Carol was the news director and morning drive news anchor and talk show host at KABC Talk Radio in Los Angeles. She moved to LA in the mid 90s to become morning drive anchor at All-News KFWB. Carol started her career in Chicago where she as a founder and an active member of the National Association of Hispanic Journalists.

In addition to his host responsibilities at KNX, Dick also works as senior political correspondent for the station and has been at the heart of the station’s political coverage for the past twenty-three years. He has enjoyed a lengthy career with CBS/Entercom Radio and served on an afternoon show at WBBM in Chicago prior to his current role.

Carol, a journalism graduate of Grady College, re-engaged with the college about ten years ago during a Peabody Awards event in LA where they met Parker Middleton, recently retired senior director of external programs, and former dean Cully Clark.

“We were so impressed with the Peabody committee, fellow alumni and with Parker that I knew I needed to reconnect with my alma mater,” Carol said. “We decided to start visiting the campus yearly, visit with students and start providing financial assistance for the good work Grady College does in preparing the journalists of tomorrow. The relationship continues to grow with Dean Davis.”

Carol’s fondest memories of her time at Grady were in the class of her favorite professor, the late Bill Martin who taught Newswriting for Broadcast.

“He was my advisor at Grady and was one of a kind,” Carol said. “He was tough in the classroom but I always knew he cared about all his students. I remember always looking forward to my classes at Grady, they were the highlight of my academic day because I knew I was moving toward the career I had dreamed of since I was 12 years old.”

Editor’s Note: The Fellowship induction, along with recognition of the 2020 Alumni Awards recpients, will take place virtually on April 16, 2021 at 7 p.m. on our YouTube and Facebook pages. Visit our Grady Salutes webpage for the latest updates.