Many describe Eugenia Harvey (ABJ ’82) as a journalist who has impact as a storyteller and a legacy of connections and relationships.

“Being able to grow—whether it is moving into the digital landscape, or learning to work from home, or working with people who politically and socially disagree with you—all of that is a part of having gone to Georgia,” Harvey said.

Harvey serves as the Chief Diversity, Equity & Inclusion Officer and a member of the senior 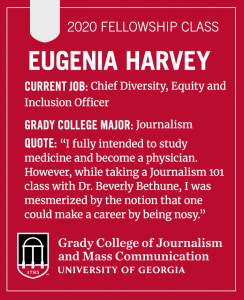 leadership team at WNET, a family of PBS television and radio stations, websites and programming in New York and New Jersey. She also is an executive producer for WNET, directing the station’s major initiatives including “Chasing the Dream: Poverty & Opportunity in America” and “Peril & Promise: The Challenge of Climate Change.” The “Chasing the Dream” initiative was nominated for two New York Emmys in 2019 for its “Getting Off the Streets” series and  for two in 2020 for its series “A Dream Deferred.”  Harvey has also served as a producer for “Race Matters: Solutions” on PBS NewsHour with Charlayne Hunter-Gault (ABJ ’63).

Prior to WNET, Harvey left an indelible mark on the world of news media as a veteran broadcast journalist on ABC News’ “PrimeTime Live” and “48 Hours” (CBS), as well as serving as an executive producer for “Third Rail with OZY,” and shows on CNN and BET.

After graduating Grady College with a degree in broadcast journalism and minors in political science and Spanish, Harvey went on to earn a master’s degree in journalism at Columbia University.

Harvey said when she entered UGA, she intended to study medicine, but while taking a journalism class with Dr. Beverly Bethune, she was mesmerized by the notion that one could make a career by being nosy. When her student broadcasting project won a prestigious Esther Award (named for Georgia Association of Broadcasting legend Esther Pruett), Harvey took that as a sign she had made the right decision.

“My degree has taken me places and shown me things and introduced me to people that I did not even know existed, and so for that I will be forever grateful for the journalism program at UGA.”