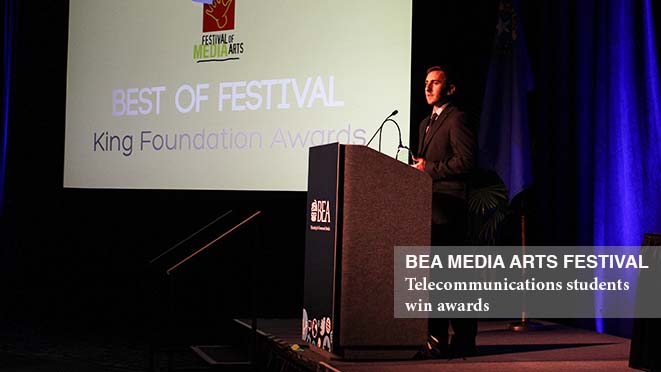 Three students pursuing degrees in the Grady College of Journalism and Mass Communication Department of Telecommunications are winners of the 2014 Broadcast Education Association (BEA) Festival of Media Arts, an international competition of faculty and student digital media productions.

“We are so proud of Evan, Travis and Meredith. Their talent and hard work have impressed all of us since they joined the Department of Telecommunications,” said Department Head Ann Hollifield. “We are all delighted to see the three of them recognized as exceptional in an international competition of their peers in this industry. I don't doubt that we will hear a great deal from all of them in the future.”

Evan Simmons, a senior from Metter, Ga., majoring in mass media arts, won the Best of Festival award in student scriptwriting. An original script for an hour-long TV pilot, “Rogues” was written under the direction of Shira Chess, assistant professor of telecommunications.

“It is the story of a princess who joins a gang of outlaws and becomes an assassin to avenge her peasant boyfriend's murder,” Simmons said of the script.

The Best of Festival Award means that Simmons' screenplay was considered to be the best student script submitted to the Festival in any scriptwriting category. The award came with a $1,000 prize.

“I was honored and humbled to receive my award in Las Vegas, and it was a lot of fun to experience the city and see how grandiose and massive everything is there,” he said. “I never thought while writing the script last semester that it would lead to anything like this.”

Simmons is currently working to start a mobile media team, potentially as a non-profit organization, and plans to travel internationally to help missionaries tell their stories through visual and online media.

Travis Harris, a senior mass media arts major from Atlanta, tied for first place in the Television Spec Script category for “Foot Sweat,” which he wrote under the direction of Amy Sindik, formerly a visiting assistant professor of telecommunications.

The script was written for a standard 30-minute episode of the Fox sitcom “New Girl,” Harris explained, and the plot “revolved around characters Jess and Winston covering a bar shift for Nick while he and Schmidt search across the city for Schmidt's mysterious dream girl.”

Following graduation in August, Harris plans on moving to Los Angeles to pursue a career in film and television with hopes of writing and producing.

Meredith Dean, a senior from Alpharetta, Ga., majoring in digital and broadcast journalism, won second place in the Television News Feature category for her story “America's Stonehenge,” which aired on the university's student-produced daily half-hour newscast, NewSource. The piece was produced under the direction of professors Michael Castengera and Dodie Cantrell.

Dean is focused her job search, but also plans to spend the summer post-graduation in Africa working with her family's non-profit organization, Habitat Aid Initiative.

More than 1,250 entries were submitted to the BEA competition last year.