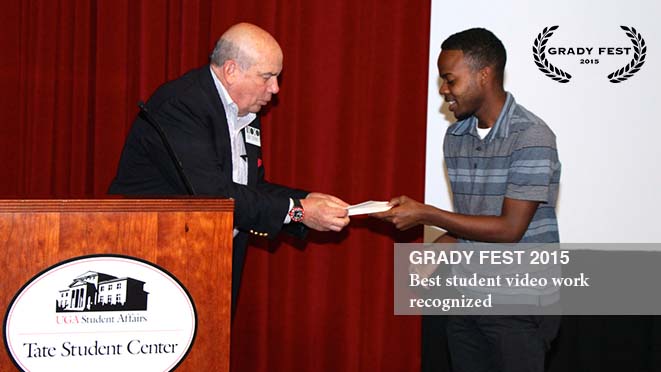 The best video work created by mass media arts and digital broadcast journalism majors during the 2014-15 academic year was on display at Grady Fest on May 7 at UGA’s Tate Theater.

Winning the Turner Entertainment Networks Best of Festival Award was “The First Real Place,” a short film about a recent college graduate moving into his own apartment for the first time while preparing to start his career.

The story, which unfolds through a father-son phone conversation, was directed by Alex Yarber and produced by Lauren Schorr.

Randall Abney, who is a Grady Fellow along with wife Carolyn, gave the Dean’s Horizon Award to “Beerocracy: One Nation Under Hops.”

“It had quality sound, great effects, very nice photography, and it was great investigative reporting,” Abney said of the abridged version of the documentary directed by Cameron Johnson and produced by Savanna Thompson.

The Raines Plambeck Doggone Dawgged Future Filmmaker Award, a legacy of the 2012 Grady alumna by the same name, was presented by Parker Middleton, senior director of development and alumni relations at Grady College.

“It means that a filmmaker has come up against every odd, has triumphed over adversity, has shown persistence, perseverance—you name it—to complete their creative vision,” Middleton explained.

The award went to Devyn Trottier, director of “Umbrella.”

Congratulations to student festival co-directors Stephanie Hotchkiss, Tavis Vannucci and Beau Ward, and to the additional list of winners below:

•   Best of 3210: “Wake Up” directed by Johnny Morgan and produced by Lindsey Smith