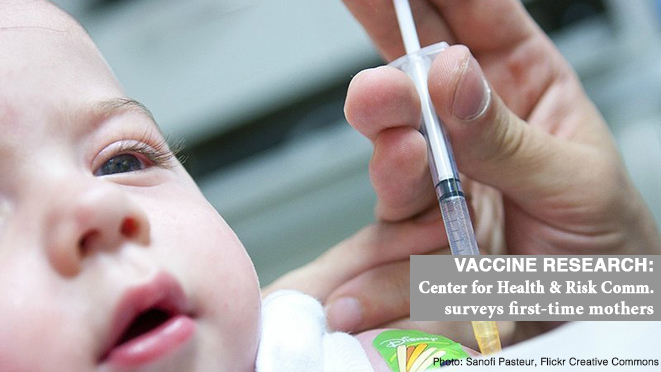 First-time expectant mothers who do not plan to follow the recommended childhood immunization schedule differ in a number of ways from mothers who do, according to a recent study led by the Center for Disease Control and Prevention and the University of Georgia.

Most significantly, “mothers who weren’t planning on following the schedule were relying primarily on Internet sources and family or friends for information, so finding ways to reach them with information from pediatricians or family physicians could be very helpful, said study co-author Glen Nowak, director of the Center for Health and Risk Communication in UGA’s Grady College of Journalism and Mass Communication.

The researchers found that 75 percent of the 200 first-time expectant mothers they surveyed planned to follow the recommended immunization schedule. However, 10.5 percent were planning to spread out recommended vaccinations, and 4 percent were planning to have their child receive some but not all of the recommended vaccinations. The remaining mothers, 10.5 percent, were undecided on the schedule as of their second trimester of pregnancy.

The study did not include expectant mothers who were planning to forego all recommended vaccines, a group that is estimated to be around 1 percent of all parents.

The survey, which assessed expectant mothers’ vaccination plans, information seeking behaviors and beliefs, was conducted between June and September 2014. The study’s results were published in the American Journal of Preventive Medicine and Vaccine.

“Most of the moms-to-be indicated they were interested in information on childhood vaccines, but many were not actively looking for such information, and very few had received any from a health care provider,” Nowak said.

The study found that nearly all expectant mothers believed immunizations were important (25 percent) or very important (59.5 percent) for keeping children healthy. Those who were unsure about their vaccination plans or who were planning to delay or decline some vaccinations had less confidence in the safety, effectiveness and value of routinely recommended vaccines. Notably, undecided mothers’ had the lowest levels of confidence.

“Along with suggesting that providing OB-GYNs with ways to connect first-time expectant mothers with vaccination information from health care providers, the findings indicate pediatricians and family physicians should be careful when it comes to assuming how familiar new parents are about childhood vaccines,” Nowak said. “Some new moms may have a high level of knowledge, but most probably do not—and some of the things they are not aware of may help increase their vaccine-related confidence.”

This survey is part of a larger, ongoing, longitudinal study of these mothers. The overall study involves a total of seven surveys. Questions about vaccination behavior, knowledge, information seeking and confidence will be asked after the child’s two-, four-, nine-, 12- and 15-month vaccination visits. One of the goals of the study is to see whether vaccination experiences affect parents’ beliefs, confidence and vaccination behaviors.