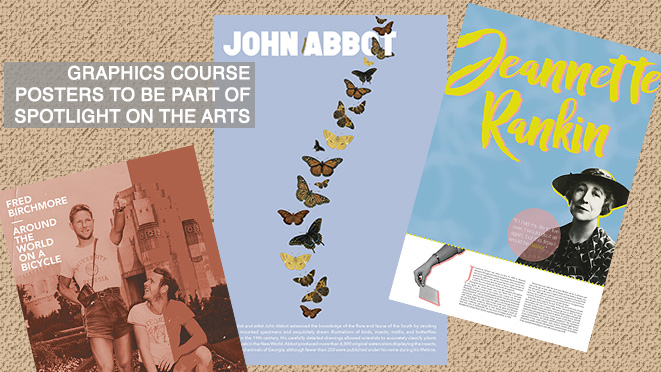 The graphics projects that many students design in the typical Graphics Communications class may be viewed by a handful of students and by the professor. However, the projects in Kristen Smith’s introductory graphics class this semester have the opportunity for not only a much broader audience, but also a richer research process, as well.

Smith, a senior lecturer in public relations in the Grady College of Journalism and Mass Communication, is leading her students in a special session of the graphics class that is working with the University of Georgia Special Collections Libraries. Students were asked to design posters that will be displayed during the annual Spotlight on the Arts festival in November.

The inspiration for the poster project came after Smith served as an inaugural Special Collections Libraries Faculty Fellow last year. The fellowship program was created by the libraries and the Center for Teaching and Learning to educate university professors about how they could incorporate the collections into their classroom lessons. The fellowship funds classroom projects created using the collections and resources at the library.

“The goal of the poster project was to provide a deep understanding of a local or national treasure, and depending on their project, where that person or thing fits into not only history, but design history,” Smith said.

The assignment features visuals and text about topics in special collections including, but not limited to, Jeannette Rankin, the first woman elected to Congress; Erté, notably known as the “Father of Art Deco;” Jackson EMC, which led the way in making electricity available in rural areas of north Georgia; and Fred Birchmore, an Athens, Georgia, native who rode his bike around the world.

Chelsea Jenkins, a public relations major from Covington, Georgia, chose to profile Birchmore for her project. Jenkins’s poster features a picture of Birchmore with his bicycle, which he called Bucephalus. She also included a couple of paragraphs that depict his life and some sites he encountered throughout his trek.

“The biggest challenge I faced was trying to incorporate how far Birchmore traveled into the poster,” Jenkins said. “My original idea was to have a map of some of the places he explored as the background of the poster. While that idea didn’t really work out, I feel as though we get a snippet of what he did and where he went in the paragraphs I’ve included.”

Typically, the AdPR 3520 Graphics Communications class spends the entire semester learning about basic principles of design, typography and graphics software. This special class has the same goals, but also applies a focus on learning 20th century design styles, and broadens their resources through using the Special Collections Libraries to understand design styles.

“I have really enjoyed the hands-on experience of working in the Special Collections library,” said student Jamie Yale, a junior public relations major, who chose to profile Spanish artist José de Zamora. “We were given a lot of freedom when creating this poster, from selection of the artist to use of design principles, and I think this really helped me independently create one of my first graphic design posters.”

Perhaps the biggest advantage of the special focus graphics class was the knowledge that the Special Collections Libraries is there and has an array of resources.

Kaitlyn Yarborough, a senior journalism student from Albany, Georgia, profiled naturalist and artist John Abbot based on a large book he illustrated that she saw at the library.

“I had never entered the Special Collections Library until this project,” Yarborough said, “and, I discovered that it houses some really interesting collections on the history of Georgia, from Native American artifacts to vintage cheerleading uniforms from the university. It has a huge array of cool things that I would never have known about otherwise.”

Posters designed by Grady College students (from l. to r.) Rosemary Ankerich, Kaitlyn Yarborough and Maddie Shae are among those that will be displayed on the third floor of Grady College Nov. 2-18. The posters were based on research completed at the Special Collections Libraries and the display is part of UGA’s Spotlight on the Arts.