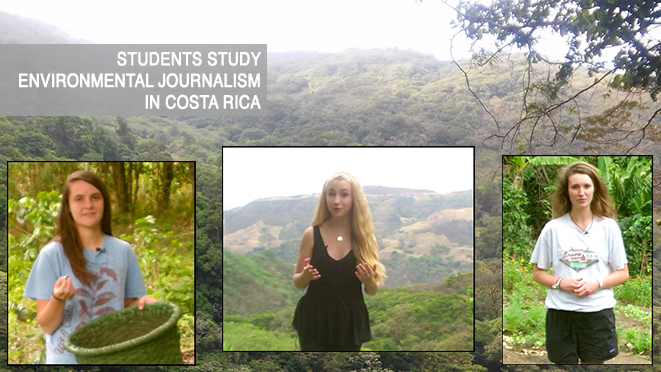 Does a study abroad program where students go zip lining off the side of a mountain, kayaking across a huge lake below a live volcano, climbing through the jungle and surfboarding across the pacific ocean, all while meeting other students from around the country sound too good to be true? It isn’t. These are some of the activities students experienced while studying environmental journalism on the UGA Costa Rica campus.

The course, taught by Michael Castengera, senior lecturer in journalism, gave students the opportunity to create their own content portfolios that covered environmental issues while enjoying the beautiful country of Costa Rica.

“Costa Rica is an unusually perfect setting for a course on environmental journalism,” said Castengera. “It is one of the only countries to make sustainability and environmental sensitivity a true national priority.”

The Maymester course was part of the Art, Astronomy and Journalism interdisciplinary program that allows students to elect two of five courses—astronomy, drawing, environmental journalism, graphic design and painting.

Students in the environmental journalism course examined a variety of issues, from sustainability to conservation to energy, according to Castengera. The course focuses less on the statistics and figures largely being reported today and more on how the environment affects us all through storytelling.

Participants in the program said they appreciated this contrast and saw progression in their abilities as a result.

“I genuinely feel like our professor cared about our growth as journalists,” third year journalism major Celia Palermo said. “I was encouraged to go big or go home. As a result, I garnered great interview skills and felt uninhibited to reach out to sources for our articles and projects.”

While in Costa Rica, the students went through a staged process of completing assignments for the class.  First, they produced a web story primarily written, and with limited pictures, on an environmental subject related to both Costa Rica and the state of Georgia.

Second, they produced a more complete online piece with written material, pictures and graphics. In that assignment, they picked a celebrity who is involved in an environmental cause and tied his or her interests back to the issues in Costa Rica and Georgia, like this report by third year publication management journalism major Jenn Finch citing actor Robert Redford’s activism on renewable energy.

Third, after conducting a lot of research and interviews, they produced a video piece and appeared on camera to tell about a particular group of people in Costa Rica who are doing something about the environment, the climate or sustainability.

All of the students’ work appears on the class website, envtjour.uga.edu.

Although the students received credit from the class, much of the learning came from the experience of the trip itself, according to Castengera, who stated that his favorite thing about the study abroad program is the perspective it provides.

“A student who may have spent most of their life in a middle class suburban neighborhood in Atlanta is exposed to a world, or worlds, entirely different from that,” he said.

“My favorite part of the program was getting to interact with the locals,” said Finch. “I realized that even though we speak a different language and live a little differently, we’re very similar.”

The UGA Costa Rica campus hosts students from different UGA programs as well as students from other schools and colleges across America. For more information about the Art, Astronomy and Journalism program visit https://dar.uga.edu/costa_rica/index.php/site/program_detail/art_astonomy_journalism_in_costa_rica/students.