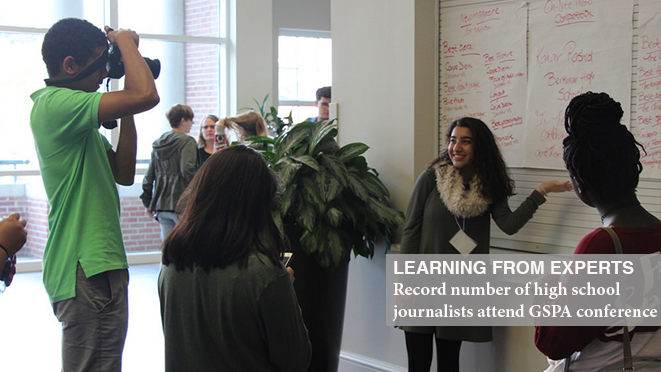 The conference boasted 61 classes for students to take based on their publication and interests. These ranged from yearbook, newspaper and broadcast classes to classes specifically focused on using Adobe products, learning how to interview and advice on how to better manage and help staffs.

“Since this was my first time planning the conference, I was a bit nervous and excited. I was astoundingly surprised by the number of attendees,” said GSPA Director Roxanna Gandía. “After speaking with a couple of advisers, I was thrilled to learn how students were enjoying themselves and leaving sessions having learned something new. It made all those months of preparation worth it.”

Throughout the conference, students involved with all mediums—from newspaper to broadcast—attended sessions given by experts in their individual fields.

One expert was Mark Johnson, head of the visual journalism program at the Grady College of Journalism and Mass Communication.  Johnson led two sessions on photojournalism: one for beginners and an advanced session for those looking to learn more about their cameras functions and abilities. In his first session, Johnson covered the motive behind taking a photo, and why it is important to care about your work. “You want to be looking for those moments of surprise, you want to be there for those moments of joy, and we have to care about the people we cover,” Johnson said.  “If you care, it shows.”

In attending these sessions, students were able to see that they weren’t alone in their struggles; other staffs had issues to work through, as well.

Philip Li, a senior from Lakeside High School and editor of his school newspaper, had one such realization in the “Real Talk” session led by Jon Reese, adviser at Decatur High School. “It made me really appreciate our staff’s cohesiveness and supportiveness of each other,” Li said. “It was beneficial to hear the problems other schools had faced and how they got through them and to learn from other experiences to better my staff.”

Many students also benefitted from the sessions by learning tips to fix problems they had been facing in their individual work. Also a senior from Lakeside, aspiring rapper Arjun Ray attended a session on caption writing. “I write a lot of perspectives pieces and I’m always told to better my captions, so I went to ‘Caption Writing and More,’” Ray said. “I found out that what you should do is make your caption so specific to your school that you couldn’t put it in another school and make it fit.”

Though there were plenty of sessions for students to attend, that wasn’t the only reason they came to the conference. Some attended exclusively to participate in the on-site contests: a photo contest, a publication critique and a first issue competition. The photo contest had six entries, while the first issue competition drew 11 newspaper entries, seven news website entries and three newsmagazine entries. Seniors Aelise Gagliano and Kristen Sherman, photojournalists from Starr’s Mill High School, are members of The Prowler. Both Gagliano and Sherman entered the on-site photo contest. “I got a camera for my 16th birthday. It’s my favorite thing to do and it’s what I plan on doing the rest of my life,” Sherman said. “I entered the contest to see if they liked my photos, to get a general critique.”

At one of the last sessions of the day, students had the opportunity to hear the results of the summer contest winners.

In the yearbook category the amount of entries this year was so high that winners were split into four categories: Small, Medium, Large No.1, and Large No.2. Winning for the Small category was Darlington High School’s Jabberwokk. The Medium category had two winners: Chestatee High School’s The Eagle and Woodward Academy’s Phoenix. The winner for the Large No. 1 category was Union Grove High School’s Wolverscenes, and the winner for Large No. 2 was West Forsyth High School’s Zephyr.  Of the five winners, Darlington School’s Jabberwokk received the “All Georgia” rating. Of the individual entries, there were twenty winners between the Literary Magazine and Yearbook entries with 54 entries being given a “Superior” rating.

Founded in 1928 by Grady College faculty, the Georgia Scholastic Press Association serves high school journalists and teachers in the state of Georgia. The organization hosts an annual fall conference, a spring workshop and a biennial advisers workshop. For more information about GSPA, visit www.ugagpsa.org.

Scripps Howard Foundation awards grant to fund Cox Institute’s reporting project
The Scripps Howard Foundation has awarded a grant to the James M. Cox Jr. Institute for Journalism Innovation, Management and Leadership for a poverty reporting initiative. The grant of $7,500 will fund the Cox Institute’s plans to use reporting on poverty as the topic for its student projects in the Fall 2020 Journalism Innovation Lab. […]
learn more

Health and Medical Journalism students report on coronavirus
When four Introduction to Health and Medical Journalism students sat around a table with several intensive care unit nurses, infection preventionists and public relations professionals at Piedmont Athens Regional Medical Center on February 27, 2020, they were discussing the possibility of coronavirus coming to the area. The discussion at the time was hypothetical. Little did […]
learn more

Talking Dog gives students an immersive communications agency experience
It is one of the first questions posed to Grady College advertising and public relations alumni when interviewing for jobs: “Do you have any agency experience?” Hiring managers seek a diverse skillset and the collaborative experience creating when working in an agency environment. In its third year, Talking Dog continues to grow and develop as […]
learn more