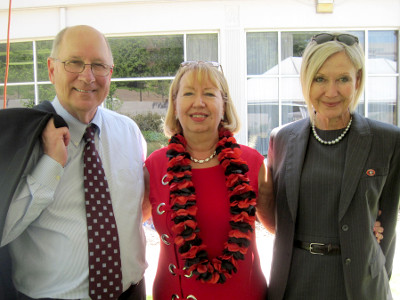 The Grady College has announced the creation of the Carolyn Caudell Tieger Chair in Public Affairs Communications.

The announcement was made April 26 as part of a luncheon to honor retiring Grady Dean E. Culpepper “Cully” Clark, and was made before board members, faculty, staff, students, university representatives and friends gathered on the Grady College lawn. Tieger praised Clark for his leadership during the past seven years and recognized his role in inspiring her to make the gift.

As with the recent Yarbrough Professorship and Chair in Crisis Communications Leadership announced by Grady, the Tieger Professorship and Chair will be the first of its kind within a college of journalism and mass communication. Its purpose is to prepare students to lead and compete effectively in the world of policy, politics and advocacy communication – a strong suit for the college, which has educated generations of public affairs leaders in politics, government, education and corporate life.

Clark commended Tieger for her vision and the generosity of her major gift commitment that will create an education and career track for students and position the college as a premier institution for students who aim to become leading public affairs professionals.

“Carolyn’s vision is born of her 40-year career in Washington’s highest echelons of influence and her continuing work today as a public affairs consultant of the first rank,” Clark said. “From her student days, Carolyn blazed her own trail as a public affairs leader and asked in many wonderful conversations that began this gift, `What if we could help students get ahead by creating a program that gave them a leg up in public affairs communications?’

“Grady students and faculty for generations to come will benefit from what Carolyn has boldly envisioned and accomplished.”

UGA Provost and incoming President Jere Morehead expressed appreciation on behalf of the University in comments to Tieger and her family, represented at the announcement by her father P.G. Caudell, sister and UGA graduate Kathy Cobb and nephew Cameron Whitlock, a Grady public relations alumnus.

In special remarks praising Clark and thanking the college for its willingness to pioneer the public affairs communications concept, Tieger said her vision for the chair and its focus grew from her desire to use her experiences to help students get ahead on a professional track she had to forge herself with on-the-job training.

Carolyn Caudell Tieger is one of the top public affairs strategists in the country.

Chris Jones, vice president of public policy for Verizon’s Southeast Region, Grady alumnus and fellow and chair of the Grady Board of Trust, thanked Tieger on behalf of the board and alumni for “connecting the dots among communication, politics and journalism.”

The Tieger Professorship and eventual Chair will provide leadership for a cohort of approximately 100 students enrolled in dual degrees with Grady majors and the School of Public and International Affairs (SPIA).

“I was putting it together myself, and this is exactly what I want my education at Grady and SPIA to prepare me to do – to work in political communications and public affairs,” she said.

A Washington communications veteran based now in Naples, Fla., Tieger is one of the top public affairs strategists in the country, especially on tough legislative issues, corporate and industry crises, litigation and reputation management. Her career spans the U.S. Congress, the White House, two international PR firms and her own company. Tieger chaired PR giant Burson-Marsteller’s worldwide environmental practice and built and led Porter Novelli’s successful worldwide public affairs practice. As a partner and managing director of Porter Novelli’s Washington office, she welcomed classes of Grady students to the firm on their annual PRSSA trip to the nation’s capitol.

Named PR News Public Affairs Executive of the Year in 2006 and Washington PR Woman of the Year by Washington Women in PR in 2005, Tieger is also a member of the inaugural Grady Fellowship and was awarded the college’s prestigious John Holliman, Jr. Award for Lifetime Achievement in 2008.

Tieger is an active member of a number of civic and philanthropic endeavors, including the Sigma Kappa Foundation, Greater Naples Leadership, Collier Child Care Resources and Naples Abused Women’s Shelter.

A 1969 graduate of Grady, Tieger has also been appointed to serve on the Grady Board of Trust.

“My dream is that Grady and UGA might be a site of the next Presidential debates,” Tieger said. “I am humbled and honored that from my parents’ sacrifices that allowed me to graduate from Grady and go on to a wonderful career in D.C., I can help students with their ambitions today.

“I am proud to be part of what Grady College is doing for democracy’s next generation.”

Established in 1915, the Grady College of Journalism and Mass Communication offers undergraduate majors in advertising, public relations, journalism, digital and broadcast journalism, and mass media arts. The college offers two graduate degrees and is home to the Peabody Awards, internationally recognized as one of the most prestigious prizes for excellence in electronic media. For more information, see http://grady.uga.edu or follow the Grady College on Facebook and @UGAGrady on Twitter.