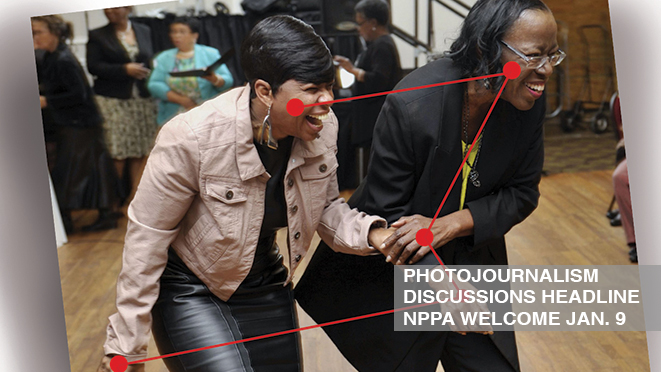 An afternoon of photojournalism discussions will be held at Grady College January 9 in celebration of the recent announcement that the National Press Photographers Association will relocate its headquarters to the University of Georgia.  This is the first of many future partnerships between Grady College and NPPA in the areas of education, research and outreach.

NPPA is the voice of visual journalists, representing photographers, videographers, multimedia journalists, editors, designers, visual managers and academics, with nearly 6,000 members nationwide and around the world.

As part of the celebration, it was also announced that Grady College will be the first stop for the Women Photojournalists of Washington’s traveling exhibit, which will be displayed in Grady College outside Studio 100 for the month of January.

2:30–3:30 p.m. Women in Photojournalism – Finding and Keeping Your Voice: This panel will be moderated by Atlanta-based photojournalist Akili Ramsess, who will be joined by Minla Shields (ABJ ’10), former photo editor of the Atlanta Journal-Constitution; Katie Schoolov, a video journalist for KPBS in San Diego; Melissa Golden (ABJ ’06), president of the Women Photojournalists of Washington group and a Washington, D.C.-based independent photojournalist; and Andrea Briscoe (ABJ ’12), Governor Nathan Deal’s photographer.

3:45–5:15 p.m. Eyetracking Photojournalism — In an age where images are instantaneous and easily shared around the world, what characteristics make a photograph worth publishing? This major new study by Sara Quinn on photojournalism gives insight into how people perceive the quality of journalistic photographs — from those taken by seasoned professionals to cellphone images that capture everyday life. With significant implications for storytellers, journalists and publishing organizations, this research combines eyetrack testing with extensive interviews asking people their thoughts on storytelling, quality, what makes an image memorable and worth sharing.

All events will be held in Studio 100, the glass-walled space on the first floor of the Journalism Building.