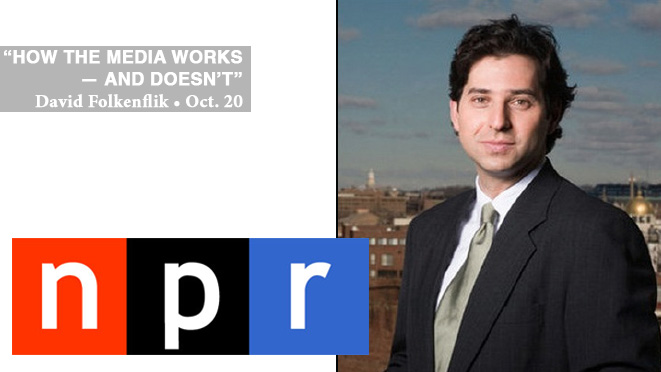 The Cox Institute for Journalism Innovation, Management and Leadership will host David Folkenflik, a National Public Radio media correspondent, Oct. 20, at 12:20 p.m. His talk, “How the media works — and doesn't,” will take place in the Drewry Room of Grady College.

Folkenflik has been with NPR since 2004 where he provides media criticism on the air and at NPR.org covering a broad array of issues — from the war in Afghanistan to the financial crisis. Previously, he covered media and politics for the Baltimore Sun and edited the 2011 book “Page One: Inside the New York Times and the Future of Journalism.” He has covered Rupert Murdoch and the News Corporation extensively and has been a frequent commentator about the hacking scandal in both the U.S. and the U.K. Folkenflik most recently authored the 2013 book “Murdoch's World: The Last of the Old Media Empires.”

Folkenlik won the Arthur Rowse Award for Press Criticism from the National Press Club three times and the inaugural 2002 Mongerson Award for Investigative Reporting on the News, presented by the Center for Media and Public Affairs and the University of Virginia's Center for Governmental Studies. Folkenflik's work has also been recognized with top honors from the National Headliners Club and the Society of Professional Journalists.

Folkenflik graduated in 1991 with a degree in history from Cornell University where he was the editor of The Cornell Daily Sun.

The James M. Cox Jr. Institute for Journalism Innovation, Management and Leadership prepares students and professionals for leadership roles in the news media. The Cox Institute was established in 1990 by the late Conrad Fink, a legendary journalism professor in the Grady College, as the Cox Institute for Newspaper Management Studies. It is named for the late James M. Cox Jr., who headed Cox Enterprises and Cox Broadcasting Corporation from 1957 until 1974.