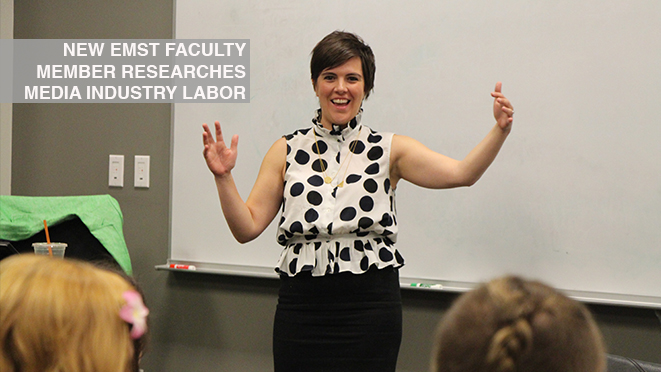 As a media industry scholar who studies labor issues, Kate Fortmueller brings a unique perspective to the Grady College of Journalism and Mass Communication.

Fortmueller joined the Department of Entertainment and Media Studies (EMST) this fall as an assistant professor after previously teaching at the University of Southern California School of Cinematic Arts and Fairfield University.  Her work centers on media industry labor with an emphasis on actors and below-the-line workers—people who are essential to the production, but not visible on screen.

“Dr. Fortmueller’s research in motion-picture production studies with an emphasis on labor issues provides the department and college much-needed depth in key areas,” said Jay Hamilton, EMST department head. “In the current times of increasingly contractor and project-based employment in media industries, her blend of historical and contemporary research helps make better sense of why this kind of employment is so pervasive, how it shapes the kinds of entertainment media made today, and how it will shape the media work and products of tomorrow.”

“Given the growth in media production in Georgia, UGA was a particularly exciting place for me to study some of the key changes in the contemporary media industries,” said Fortmueller, whose work appears in Television & New Media and is forthcoming in The Journal of Film and Video and Film History. “My research is not strictly contemporary, so access to the Peabody Archives and UGA’s Special Collections was tremendously appealing.”

Fortmueller is working on a book project that builds off research from her dissertation that looks at the history of actors and extras as a labor force.

“Even though actors constitute the largest body of media workers and most people relate to films and television programs through on-screen performances, there has been very little work that sheds light on what it means to work as an actor,” she said.” I am, of course, interested in actors and extras as a labor force, but they also provide a lens for understanding broader shifts in labor, as well as a way of looking at struggles and complications that come with working in a competitive and creative field.”

In addition to research, Fortmueller is enjoying her time in the classroom. Though classes began only weeks ago, she says she is already impressed with the caliber of student work.

“Grady students have lived up to their reputation,” she said. “They are bright, inquisitive and engaged in the classroom.”

Fortmueller looks forward to teaching the Business of Media Entertainment this spring, a class closely related to her research that “will also help give students a much clearer understanding of the complicated industry that they plan on entering after graduation.”

This summer she will teach in Los Angeles as part of the Grady LA program.

“This is a great opportunity for students to connect their classroom learning to the culture and resources in Los Angeles,” she said. “I lived there for nine years, so I am looking forward to sharing my LA knowledge of everything from Hollywood history to where to find the best tacos.”