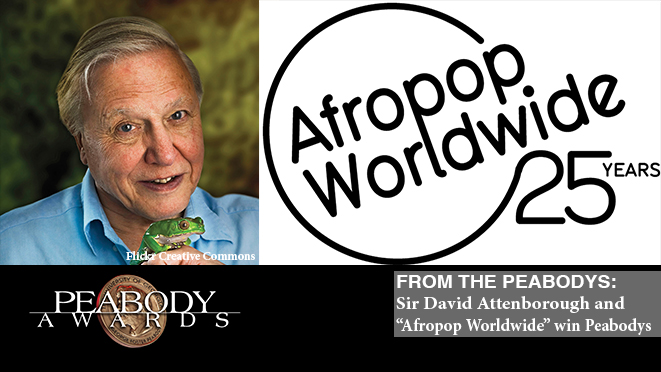 The Peabody Awards at the University of Georgia announced Individual and Institutional award winners Tuesday, the first on a diverse list of 2014 honorees that will be revealed over the next two weeks.

Sir David Attenborough, the British naturalist and conservationist, was cited for his illustrious, six-decade career as a host and producer of natural-history programs, and “Afropop Worldwide,” a long-running public-radio series that explores the international manifestations and influence of African, African-American and Afro-Caribbean music, was chosen for an Institutional Peabody.

Peabody recipients from the entertainment field will be announced live on ABC’s “Good Morning America” on Thursday (April 16) during the broadcast’s 8:30-8:45 a.m. segment. News and radio winners will be announced on April 20 on the Peabody website, www.peabodyawards.com, as will winners in the areas of documentary, public service, education, and children’s programming on April 23.

“The Peabodys are delighted this year to recognize two international icons, a pioneering natural-history documentarian and a radio show that celebrates the global language of music,” said Jeffrey P. Jones, director of the awards program.

Sir David Attenborough has been intimately involved with television programs about the natural world for more than 60 years, starting with “The Patterns of Animals,” a studio-bound BBC series that employed animals from the London Zoo. He began his globe-hopping field career in 1954 with “Zoo Quest,” which documented his team’s animal-capture expeditions. Beginning with “Life on Earth” in 1979, Attenborough has produced and hosted beautiful, innovative series that became the benchmark of wildlife film-making and influenced a generation of natural history documentarians. His resume, including the Peabody winners “The Private Life of Plants” (1995) and “The Life of Birds” (1999), reflects a curiosity that never diminishes and an ecological awareness that continues to grow. In Britain, he’s considered a national treasure. Everywhere his work has been televised, he’s considered a credit to his species.

Twenty-six seasons old and counting, “Afropop” is a weekly, hour-long program and website (afropop.org) that celebrates and explains the contemporary musical cultures of Africa, the Caribbean, the Americas and the Middle East. Originated from Cameroon with Georges Collinet as host, it not only broadcasts a wide selection of music; it brings the cultures from which the music springs to life with aural ambience and interviews collected in Johannesburg,  Dar es Salaam, Havana, New York,  Rio, San Juan, Dakar, and beyond. It has introduced its listeners to world-class artists such as Cesaria Evora, Los Muñequitos de Matanzas and Ali Farka Toure and many others. Produced by World Music Production and distributed to U.S. public-radio stations by PRI, “Afropop Worldwide” is at once a dance party and master class. It’s got a great beat, and you can learn from it.

These and other winners of the 74th annual awards will be presented with their statuettes on Sunday, May 31, at the first-ever nighttime, red-carpet Peabody ceremony. Fred Armisen, a Peabody winner for his work on “Saturday Night Live” and his series “Portlandia,” is set to host the gala at Cipriani Wall Street in New York. Pivot will use the ceremony as the backbone of a 90-minute Peabody special that will premiere June 21.