Welcome to the Spring 2023 Residency 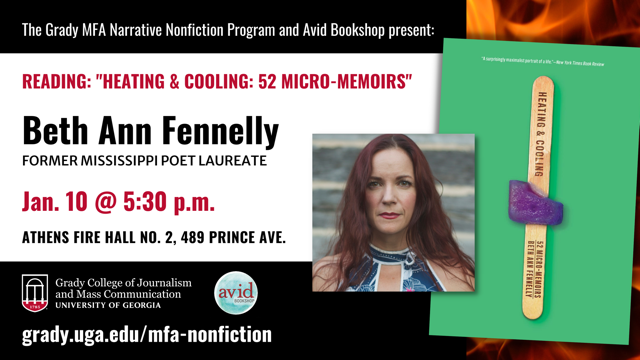 View pictures from our Fall 2022 Residency: 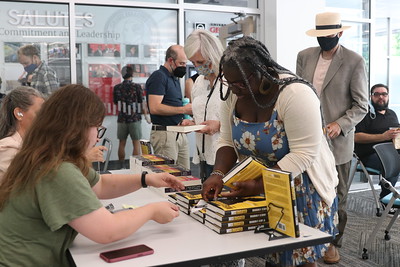 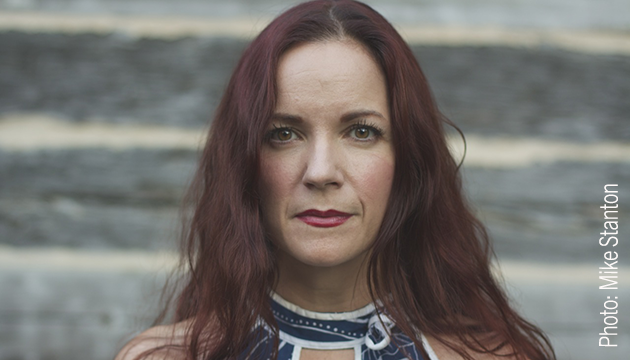 Beth Ann Fennelly was the Poet Laureate of Mississippi from 2016 to 2021 and teaches in the MFA Program at the University of Mississippi, where she was named Outstanding Teacher of the Year. Beth Ann has published three poetry books: “Open House,” “Tender Hooks” and “Unmentionables,” all with W. W. Norton. She is also the author of three books of prose: “Great With Child: Letters to a Young Mother,” a collection of essays; “The Tilted World,” a novel co-authored with her husband Tom Franklin; and “Heating & Cooling: 52 Micro-Memoirs” (2018)—a celebratory book that combines the compression of poetry with the truth-telling of nonfiction. Ranging from childhood recollections to quirky cultural observations, these micro-memoirs build on one another to arrive at a portrait of Fennelly as a wife, mother, writer and deeply original observer of life’s challenges and joys. A contributing editor to the  Oxford American, she also writes freelance on travel, culture, and design for many magazines. Beth Ann lives with her husband and their three children, Anna Claire, Thomas and Nolan, in Oxford, Mississippi.

Latria Graham is a journalist and fifth-generation South Carolina farmer. A graduate of Dartmouth College, she later earned her MFA in Creative Nonfiction from The New School. A contributing editor to Garden & Gun Magazine and Outside Magazine, she is the writer behind Garden & Gun’s This Land column that uses time, place and memory to document the rapidly disappearing aspects of the natural world in the South. Her work has been featured in The New York Times, LA Times, The Guardian, espnW, Southern Living and The Atlantic. She is the 2023 Faculty Inclusive Excellence Initiative Visiting Scholar at Augusta University in Augusta, Georgia. 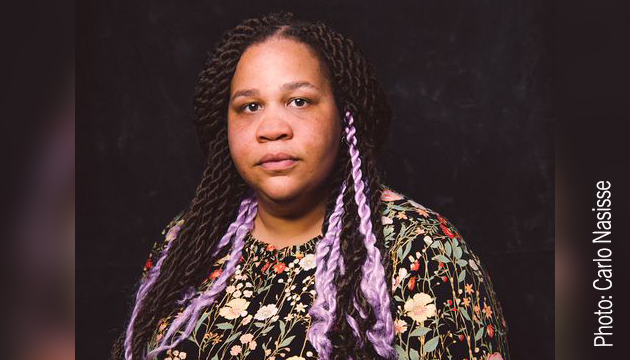 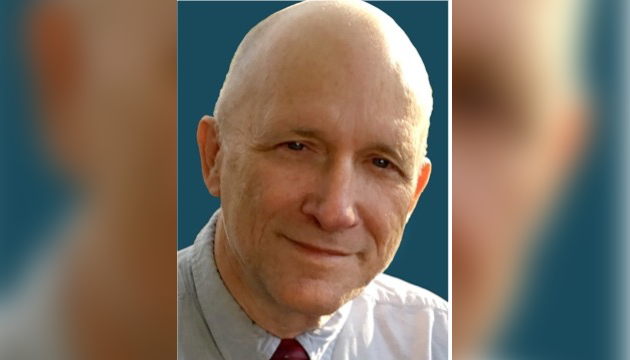 Jeff Johnson (MFA ’18), is a historian and documentary journalist interested in stories springing from the ways humans measure and value nature. His most recent piece is “God Almighty’s Meat House,”  featured in the Fall 2022 issue of Gravy. He makes his home in Gainesville, Georgia.

Sarah Khalil is a literary agent and editorial manager for Kneerim & Williams. She seeks serious narrative nonfiction with a lens toward social, economic and environmental justice; anti-imperialist thought; pop/cultural criticism and histories; cross-cultural narratives; and writing from Caribbean, MENA, Muslim and LGBTQIA+ creators; all deeply explored by experts—academics, journalists and those with lived experience. Big ideas, radical thought and propulsive writing are the cornerstones of her taste. She is also seeking select fiction in the same space. Sarah has worked in trade publishing and legal environments in Boston and Beirut, Lebanon. She holds an MA in Publishing & Writing from Emerson College, and a BA in English Literature with a minor in history from the American University of Beirut. She has worked at Beacon Press and the IP law firm Sennott, Williams & Rogers. 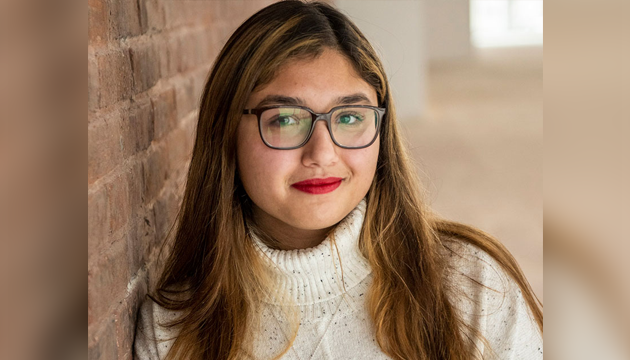 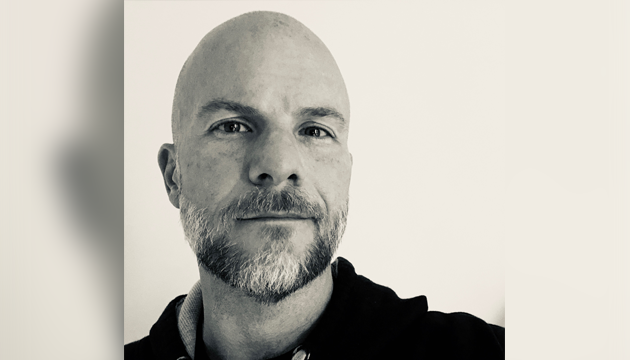 Martin Padgett (MFA ’18) is the author of “A Night at the Sweet Gum Head: Drag, Drugs, Disco, and Atlanta’s Gay Revolution” (W. W. Norton, 2021), which emerged from writing packets submitted during his time in the narrative nonfiction MFA program. A journalist and historian for more than 30 years, Marty has written for Bitter Southerner, Oxford American, Gravy, The Paris Review, The Washington Post and Creative Loafing on topics ranging from the wild horses of Arizona’s carceral system to the novel legal defenses of Atlanta strip clubs, the best dive bars in the French Quarter (RIP Flanagan’s) and the economic effects of self-driving cars. His next book, “The Many Passions of Michael Hardwick: Sex and the Supreme Court in the Age of AIDS,” will be published by W. W. Norton in 2024. He’s wrapping up his long tour of duty in the academic world with a Ph.D. in History at Georgia State University, so please bear with him.

Sonam Vashi is an award-winning freelance journalist and nonprofit news founder in Atlanta who’s written for the New York Times, Atlanta magazine, ProPublica, National Geographic, and several others. She usually writes about criminal justice, immigration, and Atlanta, where she’s lived nearly all her life. She specializes in court and historical research, and has taught and worked on multiple projects related to Jim Crow–era racial terrorism in the South, especially the 1906 Atlanta Massacre. In 2020, she co-founded Canopy Atlanta, a community-powered nonprofit newsroom producing stories chosen, reported, and presented with Atlantans, and currently co-directs the organization. She was previously a John S. Knight Community Impact Fellow. 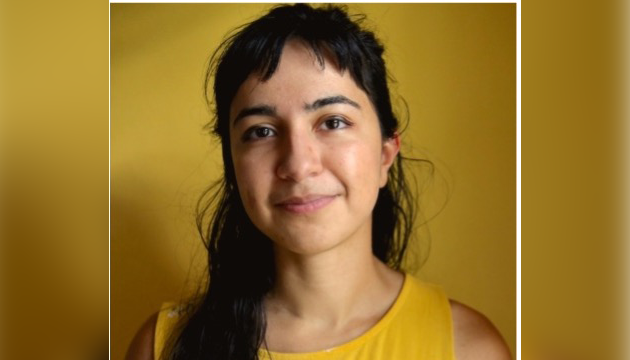 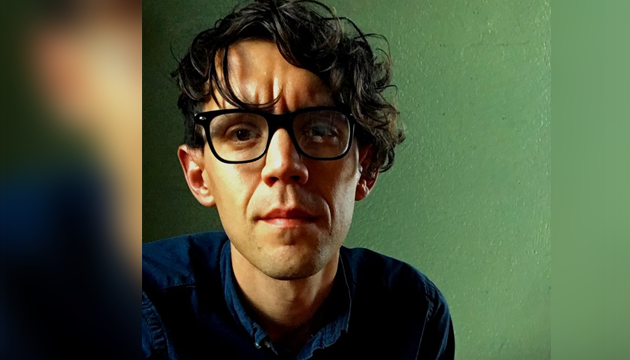 Sam Worley is the deputy editor of Atlanta magazine, focusing on news, features, and food and dining. Sam was previously the deputy editor at the Chicago Reader and a senior writer at Epicurious, has written for publications including Lapham’s Quarterly, Chicago magazine, the Los Angeles Review of Books, and Conde Nast Traveler, and is currently (very slowly) completing an MFA in creative nonfiction at Sewanee: The University of the South.

Michell Davis is an experienced entertainment attorney who has represented writers, directors and producers in the film industry for nearly 20 years. She started her legal career as a patent attorney, but quickly shifted to focusing on other areas of intellectual property law, namely copyright and trademark law. Her love for the creative arts gave her a great foundation for establishing and growing an entertainment law practice, mainly representing independent filmmakers. Her law practice has expanded to include corporate law, but representing artists continues to be her love.

Michell understands the often overlooked pitfalls in the script to screen process. Her experience and expertise in business, contracts, and copyright law have proven to be the right mix of skill and practical experience to successively guide her clients. She represents commercial, narrative and documentary filmmakers for television and film and has had the pleasure of sharing in her clients’ tremendous success through the years. 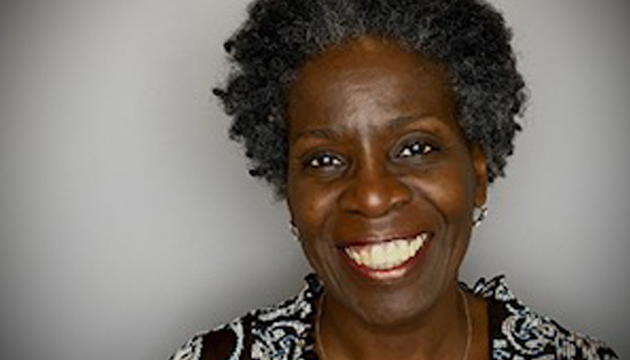 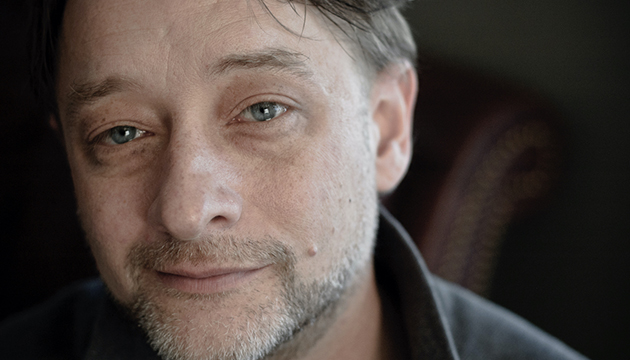 Darren Dean is an American producer, writer, and director. A four-time Independent Spirit Award nominee, Dean is responsible for producing the award-winning features Prince of Broadway (which he co-wrote with his long-time collaborator, director Sean Baker), Kinyarwanda; tangerine; and The Florida Project. He also produced the Clio Award-Winning short Snowbird, as well as Pioneer High. He has been nominated for an NAACP Image Award (Kinyarwanda) and has won the 2016 GLAAD Media Award for Outstanding Feature (tangerine).

Most recently, he produced the Sundance favorites The Infiltrators (Sundance Audience Award: NEXT) and Premature (Independent Spirit Award nomination). His new award-winning LGBTQ+ wrestling documentary, Out in the Ring, is currently on the festival circuit.

Tamlin Hall is a writer/director/producer. He received the Humanitas Prize for writing and as a director his projects have won top prizes at Dances With Films, Atlanta Film Festival, Breck Film Festival, Orlando Film Festival and garnered a Georgia Film Critics Nomination. Tamlin’s work can be seen on PBS, Apple TV, Tubi TV, and Amazon. Hall received his MFA from the renowned UCLA School of Theatre, Film, & Television MFA Screenwriting Program. He has been a fellow for the National Association of Theatre Owners, Mid Atlantic Arts Foundation, and Mandela Washington Fellowship Reciprocal Exchange Program. Hall is a member of the Writers Guild of America. 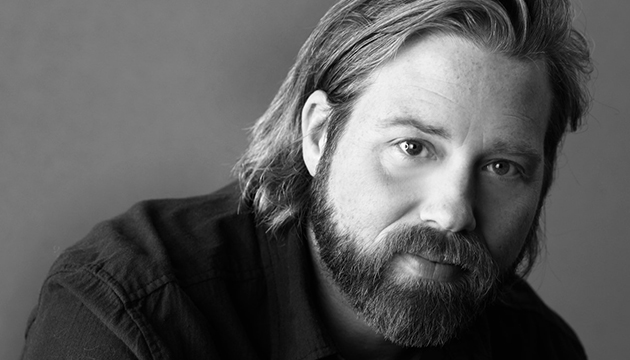 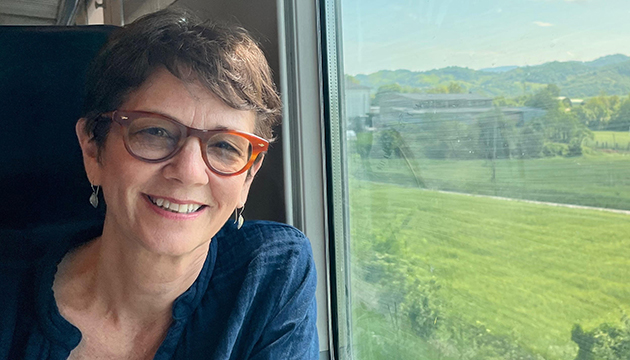 Amy McGary‘s life in film has provided a broad perspective of the industry since graduating from the University of Georgia and stepping onto her first film set. Amy has worked as a producer, writer, Emmy-award-winning decorator, and designer on small independent films, television movies and series, Academy Award, and blockbuster features. Recently, she teamed up with her sister, Kristen, to form Screen Lloyd to develop their own content for film and television and support an ever-evolving community of writers and artists.

As well as winning an Emmy for Set Decoration for The Oldest Living Confederate Widow Tells All, Amy’s career in the Art Department includes Melissa McCarthy’s Life of the Party and The Boss, Ride Along I and II, We Are Marshall, Drumline, Glory, Driving Miss Daisy, and the very first Terminator. Her episodic television work includes Rectify, Drop Dead Diva, and the acclaimed I’ll Fly Away.

Kristen McGary graduated from UGA and began making her mark as a camera operator and producer in Atlanta with her first job out of college. She went on to sets in various roles – from director, producer, shooter, writer, editor, and decorator. Currently, Kristen and Amy McGary helm Screen Lloyd – a company devoted to creating and producing content, as well as supporting and championing other filmmakers and their work. Kristen McGary’s feature directorial debut, THE ADVENTURES OF OCIEE NASH, starring Keith Carradine and Mare Winningham, was distributed by 20th Century Fox Home Video, HBO Central Europe, Netflix, and Amazon Prime. OCIEE was adapted for the screen by Kristen and Amy from a Milam McGraw Propst novel and went on to win multiple awards. Kristen McGary recently completed (2022) a YA debut novel entitled FLYER, which is being represented by Charlotte Sheedy Lit. (LEMONY SNICKET). In 2019, McGary’s short screenplay WED was a semi-finalist with the Atlanta Film Festival. McGary’s short film RAIN won a 2016 Accolade Award for Excellence: Women Filmmakers and was selected along with 30 international films to be presented worldwide in the Women in Film International Shortcase (2016). 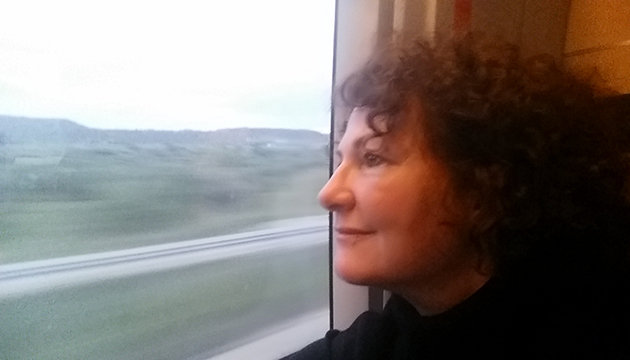 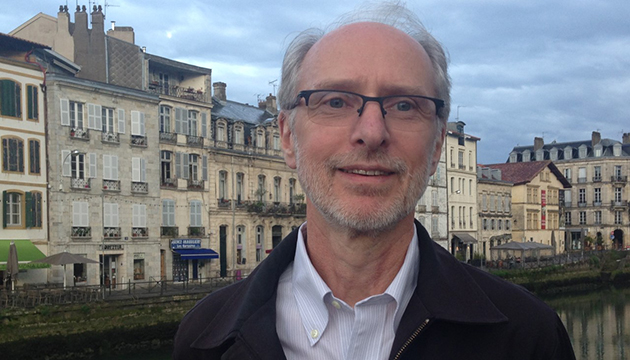 Richard Neupert is Wheatley Professor of the Arts and Josiah Meigs Distinguished Teaching Professor of Film Studies at UGA. His research areas include French film history, animation, and narrative theory. His very first book was THE END: NARRATION AND CLOSURE IN CINEMA and the most recent book (2022) is FRENCH FILM HISTORY: 1895-1946. 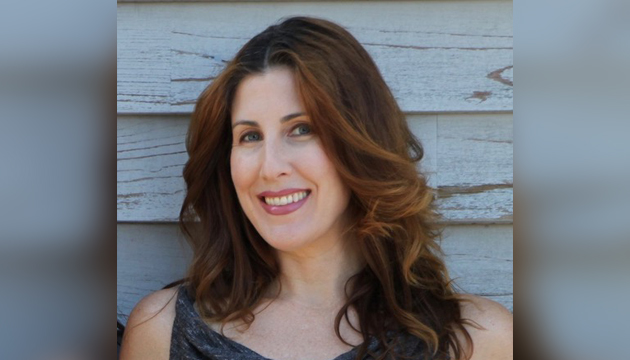 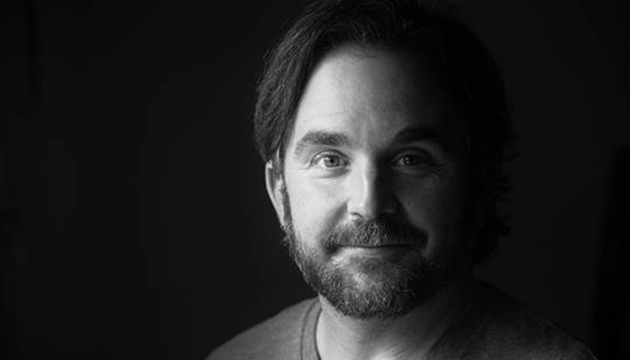 James Ponsoldt (Director, Writer, Producer) hails from Athens, Georgia. His films, which include The End of the Tour, The Spectacular Now, Summering, and Smashed (among others), have earned honors from the Independent Spirit Awards, Sundance Film Festival and National Board of Review. He’s directed pilots and executive produced shows such as “Master of None” and “Sorry for Your Loss.” Most recently, Ponsoldt executive produced and directed the pilot and multiple episodes of Amazon’s upcoming series “Daisy Jones & The Six” as well as “Shrinking” for Apple TV (starring Jason Segel, Harrison Ford, and Jessica Williams). He’s currently developing his next film. 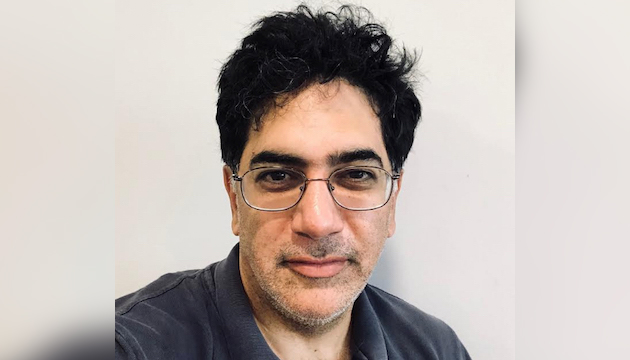 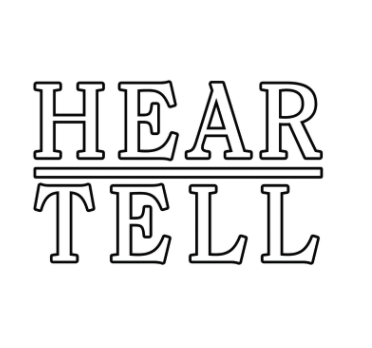 Interested in hearing more about the MFA Narrative Nonfiction program? Check out the Hear Tell podcast, hosted by André Gallant (ABJ ’10, MFA ’17), featuring interviews and readings from alumni, mentors and instructors of the program.

UGA’s unique low-residency MFA program allows students to complete most of the degree requirements off campus while developing their skills and talents under the guidance of experienced faculty writing mentors.