About: Moni Basu, otherwise known as Prof B, teaches feature and narrative nonfiction writing. She is the director of the low-residency MFA in Narrative Nonfiction and the Charlayne Hunter-Gault writer in residence.

Professor Basu teaches students how to become stronger storytellers and embrace in-depth journalism as literature grounded in fact. Her courses stress immersive reporting, narrative structure and polished language. Students in the MFA program here at the Grady College have produced successful books and published stories in major magazines. Professor Basu’s students at the University of Florida have won national accolades including Hearst Awards, the Pulitzer Prizes of collegiate journalism.

In Professor Basu’s classes, students gain hands-on experience in telling artful stories about the most complex issues of the day. In 2021, Basu launched Atrium, an award-winning narrative nonfiction magazine in Florida in whch her students could publish their work.

In the past, Professor Basu has taught magazine and feature writing and the art of the interview. She has also developed courses that focused on war and crisis reporting and how to cover traumatic events.

Basu, a veteran journalist, was previously the Michael and Linda Connelly Lecturer in Narrative Nonfiction at the University of Florida. Before teaching, she was a reporter and editor at CNN, the Atlanta Journal-Constitution and other newspapers. She still writes as a freelancer and her recent work has been published in the Bitter Southerner and Flamingo magazine.

Born in Kolkata, India, Basu grew up straddling two cultures. As such, her work has explored race and identity as well as immigration. She has reported exhaustively from South Asia and the Middle East. Her 2012 e-book, Chaplain Turner’s War grew from a series of stories on an Army chaplain in Iraq. A platoon sergeant named her “Evil Reporter Chick” and she was featured once as a war reporter in a Marvel comics series.

Basu has served as a senior editor for The Ground Truth Project and the Bitter Southerner magazine. She teaches workshops on writing at the Poynter Institute. She serves as a national advisory board member of the Asian American Journalists Association.

Basu’s work has been nominated for a Pulitzer Prize and she has won numerous state, national and international accolades, including a Joseph Galloway prize and two team Peabody Awards. But she is most proud of being named the 2020 University of Florida Teacher of the Year. She was named a Dart Center for Journalism and Trauma Fellow in 2007 and chosen for a Reuters/Stanley Foundation Global Security Seminar for Journalists in 2012.

You can connect with Professor Basu on social media: 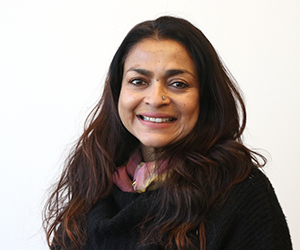