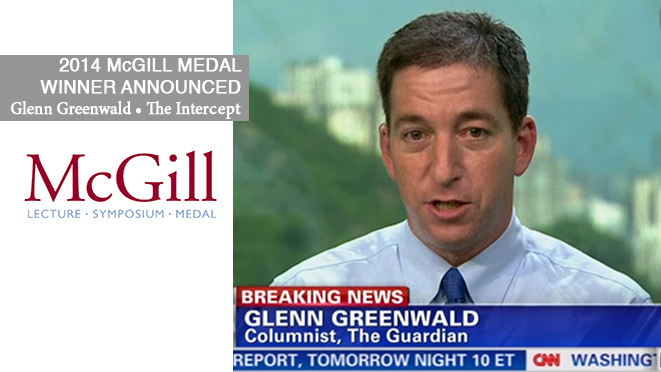 Glenn Greenwald, the journalist most-associated with coverage of U.S. government surveillance records leaked by Edward Snowden, is this year’s recipient of the McGill Medal for Journalistic Courage.

Greenwald, formerly a columnist for The Guardian and now a founder of First Look Media’s “The Intercept,” will receive the medal from the University of Georgia Grady College of Journalism and Mass Communication and its McGill Program in Journalistic Courage during a ceremony next Fall.

Greenwald, in June 2013, was the first journalist to report that the National Security Agency was collecting the telephone records of millions of U.S. customers of Verizon, one of America's largest telecom providers, under a top-secret court order.

The order, Greenwald wrote, “shows for the first time that under the Obama administration the communication records of millions of US citizens are being collected indiscriminately and in bulk – regardless of whether they are suspected of any wrongdoing.”

Greenwald was nominated by Dorothy Parvaz, an editor at Al Jazeera English and last year’s recipient of the McGill Medal.

“His work on the NSA leaks alone was courageous enough,” Parvaz wrote in her nomination. “But Mr. Greenwald has withstood what would destroy so many others: attempts at character assassination as well as attacks on his private life and partner.”

Greenwald is among dozens of journalists who reported about U.S. government surveillance based on leaks by Snowden, but none has been subjected to “a sustained campaign” to smear him, The Atlantic’s Conor Friedersdorf noted this month.

“I have been inspired by a long line of journalists, activists, whistleblowers and others,”  Greenwald said in a statement, “and am thrilled at the prospect that my work can contribute in any way to having that effect on others.”

Greenwald added: “Edward Snowden and whistleblowers like him are heroes to me and their sacrifices motivate me to do the work that I do.”

The selection was made by the 2013 class of McGill Fellows, 12 undergraduate and graduate students chosen for academic achievement, practical experience and leadership. McGill Fellow Kelsi Eccles, a senior journalism major, wrote the briefing on Greenwald.

“Did Greenwald’s reporting compromise citizen’s safety with the release of information or do citizens a favor by informing them of the government’s intelligence regarding their personal lives?”

The McGill Medal, now in its sixth year, is the latest development in the growth of the McGill program at UGA’s Grady College.

For 35 years, the McGill Lecture has brought significant figures in journalism to UGA to help the university honor McGill’s courage as an editor. In 2007, UGA added the McGill Symposium, bringing together students, faculty and leading journalists to consider what journalistic courage means and how reporters and editors exemplify it.

“All of this is for a single purpose: to advance journalistic courage,” said John F. Greenman, professor and Carter Chair in Journalism. Greenman and Diane H. Murray, the Grady College’s director of alumni relations and outreach, oversee the McGill program.

For more information on the program, see www.grady.uga.edu/mcgill.