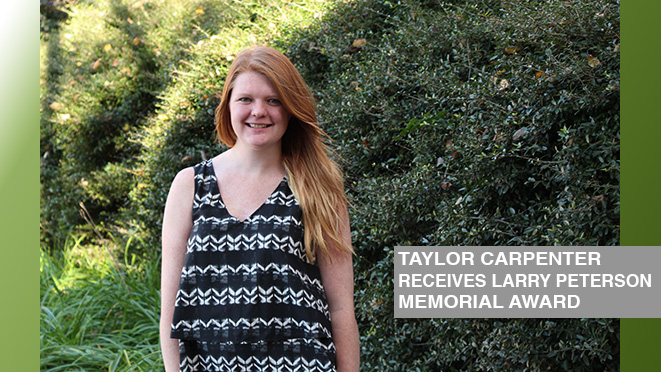 Grady senior Taylor Carpenter, majoring in journalism with dual emphasis in visual journalism and magazine writing, received the 2015 Larry Peterson Memorial Award for Investigative Journalism. Carpenter, a native of Richmond Hill, Ga., was selected by the Society of Professional Journalists along with four other students from around the state of Georgia.

“I am very appreciative for the opportunity,” Carpenter said. “It is nice for SPJ to recognize the hard work that my classmates and I put into this piece.”

Each student is a member of the 2015 Georgia News Lab and was chosen based on the student category for investigative work which was published in the Atlanta Journal-Constitution entitled, “Expense allowances for commissioner come with no strings attached,” in the paper’s June 27, 2015 edition. The article exposed the lack of accountability and oversight over expense allowances granted to county commissioners in three of Atlanta’s largest counties.

Carpenter has interned for the Bryan County News in Richmond Hill, and is currently the photo editor at the Red & Black. In the spring semester she will be interning with the AJC as a multimedia photojournalist. After graduation she aspires to work as a photo and multimedia journalist for a paper and then ultimately work as a stringer for the AP.

Mark Johnson, senior lecturer at Grady College, teaches courses in introductory and advanced photojournalism and has had Carpenter as a student.

“Ms. Carpenter is one of those students we treasure here as she uses her innate intellectual ability to tell deep stories through both words and visuals,” said Johnson. “She’s also a leader, fully willing to bring others up to speed wherever they need help. She’s the ideal journalist — she cares about both the story and the storytelling process.”

This inaugural award is named after Savannah Morning News investigative journalist and political reporter Larry Peterson, who died in 2014 from cancer after spending 15 years with the publication. Known as a “dogged seeker of truth,” the Society of Professional Journalists – Georgia and the Savannah Morning News launched the Larry Peterson Memorial Award for Investigative Journalism in 2015 to recognize exceptional investigative journalism from professional and student journalists in Alabama, Florida, Georgia and South Carolina.