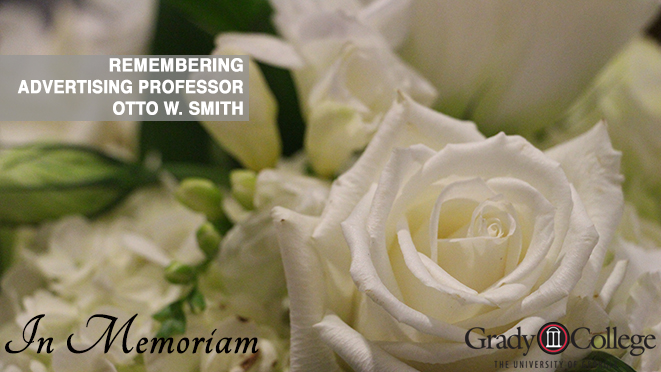 It is with heavy hearts that we announce the passing of a member of the Grady College family, Grady College graduate and retired Professor of Advertising Otto W. Smith.

“The American Advertising Federation competition began in the 7th District where we are. The first year of the competition, Ron Lane (ABJ '63, MA '65) was an advisor to the team as a graduate student along with Frazier Moore of the Grady faculty. Otto Smith was the student account executive on the team. Grady College students won the competition. (On a side note, future Grady faculty member, Leila Wenthe, led the team from South Carolina.) Otto's family had the room at the visitation filled with memories of Otto, including his certificate for winning the competition in 1967! I am surprised he still had it.”

Friends recalled that Smith earned his bachelor's degree in graphic design and his master's in advertising, both from the University of Georgia. Following his education, Smith worked in New York City with Warner, Bicking & Fenwick Advertising as an account executive. Among his clients were Cerro Mining Company of Canada and Corning (Electronic Division). At Dean Burdick Pharmaceutical Advertising, Otto was both a copywriter and art director. He returned south to work for Raymond Cohn Advertising in Jacksonville, Florida. In 1971, he became co-owner of Smith-Winn Advertising in Jacksonville. He won a number of ADDY Awards including the Best of Show. He was a member of the Jacksonville Advertising Club and the Atlanta Ad Club.

Smith was part of the Grady faculty through the 1980s and 1990s until his retirement in the mid-2000s. He was most known for teaching message strategy, portfolio and ad campaigns classes. He had several papers co-authored with Grady faculty member Len Reid and worked with Dean Krugman designing cigarette warnings they tested through a large research grant.

The following is the obituary written and posted on the H.M. Patterson & Son-Spring Hill Chapel website:

Otto Welborn Smith, age 73, of Atlanta, died Friday, December 19, 2014. Born in Waycross, Georgia on December 8, 1941, he was the son of Otto Diester and Olive (Hall) Smith. Mr. Smith was a former Professor of Advertising at the Henry W. Grady College of Journalism and Mass Communication at the University of Georgia, co-owned Smith -Winn Advertising Agency in Jacksonville, Florida, and worked for an advertising agency firm in New York City. A collector of antiques, he loved to travel, loved art, Broadway, opera, good food and fine wine. Mr. Smith is preceded in death by his parents. Survivors include his sister, Sylvia (Smith) and Al Washburn of Georgetown, Kentucky, formerly of Jacksonville, Florida; niece, Allison and Rev. Kenneth A. Miller of Weston, West Virginia; nephews, Mark A. Washburn of Benbrook, Texas, and Michael D. and Ruth Washburn of Georgetown, Kentucky; 4 great nieces; and 2 great nephews.

In lieu of flowers, the family requests donations in memory of Mr. Smith to the Grady College of Journalism and Mass Communication, University of Georgia, Journalism Building, 120 Hooper Street, Athens, Georgia 30602.