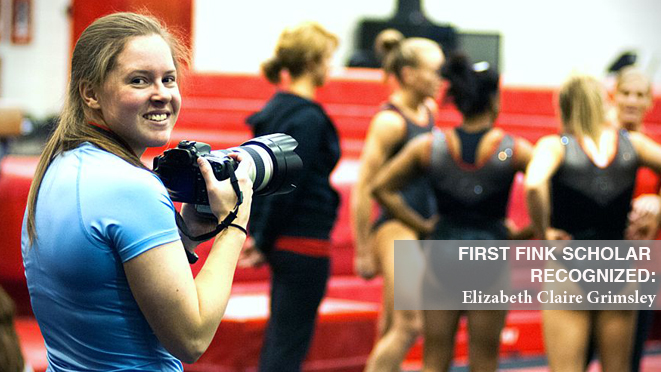 Elizabeth Claire Grimsley, a senior from Decatur, Ga., who covers the gymnastics beat for the Red & Black campus newspaper, is the first Conrad C. Fink Scholar at the University of Georgia Grady College of Journalism and Mass Communication.

Grimsley was chosen by a faculty committee because she demonstrates the “promise, journalistic integrity, intellectual courage and commitment to a career in journalism” that honors the spirit and achievement of Fink, a journalist and news executive before becoming one of Grady College’s most revered professors for three decades.

Grimsley is pursuing a degree in journalism as well as Grady College's new sports media certificate. The six-course certificate program is the first of its kind in the Southeastern Conference and offers the most in-depth sports media curriculum in the country.

“Fink would be so pleased that the first Fink Scholarship goes to a student who excels academically and at the Red & Black in sports journalism,” Davis said. “Her twin passions, sports and journalism, form the basis for a bright future in an area Professor Fink cared about deeply.”

Grimsley, a former gymnast, has an internship in Indianapolis this summer with USA Gymnastics, the national governing body for the sport. Before leaving for Indiana, Grimsley completed a “Sports Media Relations” Maymester course, in which students helped UGA Sports Communications generate and distribute online content about the 2014 NCAA tennis championships in Athens.

“Professor Michaelis’s experiences and guidance inspire me to one day be a great sports journalist,” Grimsley said.

Michaelis, who nominated Grimsley for the scholarship, said Grimsley “has the passion, the curiosity and the ceaseless commitment to excellence that all great journalists possess.”

Conrad Fink worked tirelessly at the end of his career to establish the sports journalism program at Grady.  The Fink Scholarships are endowed with contributions from former Fink students, faculty, the Fink family, the Red & Black and others.

Visit the Grady Sports Media Certificate website for more details about that program.