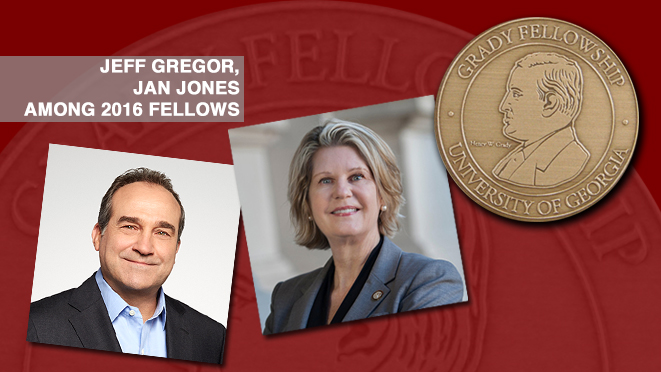 This is the second in a four-part series. Please view our first profile of Tony Barnhart and Eddie Garrett.

Jeff Gregor and Jan Jones (ABJ ’80) are among the seven honorees who will be inducted into the Grady Fellowship during “Grady Salutes: A Celebration of Achievement, Commitment and Leadership” on May 6.

Established in 2008, the Grady Fellowship honors friends of the college whose accomplishments, support and service to the industries they serve have made a positive impact on Grady College.

Jeff Gregor serves as chief catalyst officer for Turner's TBS and TNT networks. In this capacity, he leads all consumer marketing for networks, as well as their brand, digital and lifestyle extensions. In addition, he is responsible for cultivating innovation, driving key strategic initiatives and providing support to executives across Turner.

A 16-year veteran at Turner, Gregor has led the TBS and TNT marketing division since 2006, when he was appointed executive vice president and chief marking officer. Among his past roles at Turner, Gregor oversaw marketing for Turner Classic Movies (TCM) and served as the network's general manager from 2011 to 2015. Under his leadership, TCM earned its second Peabody Award.

Previously, Gregor served as director of sports asset management for The Coca-Cola Co. He also worked with Wunderman Cato Johnson, a Young & Rubicam marketing services agency, and he held marketing sales positions with the Cleveland Indians and the Philadelphia Phillies.

Gregor serves on the Grady Board of Trust, and accepted Grady’s Distinguished Learning Partner award on behalf of Turner Entertainment Networks in April, 2015.

A native of East Chicago, Ind., Gregor holds a Bachelor of Arts in economics from Albion College in Michigan.

During her time in elected office, Jones has authored a wide variety of legislation, often geared toward the educational system. Among the legislation that she has authored are HB 990, requiring a vote of the state legislature prior to expanding Medicaid through an increase in the income threshold; HR 1162, a constitutional amendment to allow a state charter commission to approve and fund state charter schools; and HB 149, Move On When Ready Act, which allows 11th and 12th grade students to leave their assigned high schools and attend a college or technical school to complete graduation requirements while earning college credit.

Prior to being elected to office in 2003, Jones served as a marketing executive for Home Box Office and also owned and operated a small business.

She earned her journalism degree from Grady College in 1980 and she also has an MBA in Finance from Georgia State University.

Read more about this year’s Grady Fellows inductees at http://t.uga.edu/2eJ