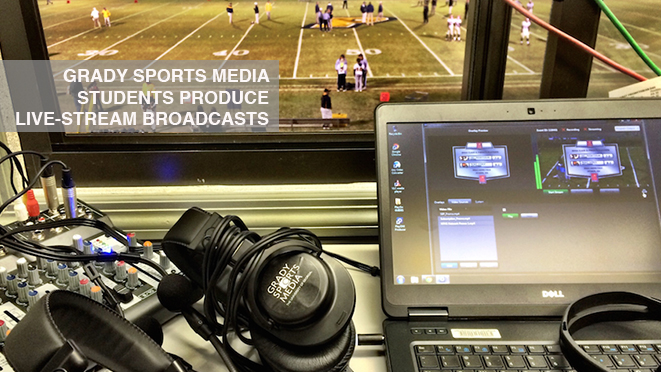 The opportunity was made possible through an expanded partnership with the Atlanta-based high school sports media company PlayOn! Sports, according to Vicki Michaelis, director of the UGA Grady Sports Media Certificate Program and creator of the program’s extracurricular leg, the Grady Sports Bureau.

“Through this partnership, we get to offer students a real-world learning experience that really is unmatched,” said Michaelis, who is also the John Huland Carmical Distinguished Professor in Sports Journalism. “We are so grateful to PlayOn! for helping us make this happen.”

For the past two years, students in the Grady Sports Bureau have used the PlayOn! platform to produce broadcasts of Clarke Central High School baseball, basketball and regular-season football games.

“The beauty of the PlayOn! platform is that it can be as basic as one camera on the 50-yard line following the action with no comments whatsoever, all the way up to a three-camera crew with sideline reporters and color commentary,” Michaelis said.

For the football playoffs, teams of four to six members of the Grady Sports Bureau were responsible for all camera work, graphics and play-by-play coverage. In advance of the playoffs, PlayOn! donated a two-camera kit to the Grady Sports Media program, and company representatives came to Athens to train the students on the equipment.

“I have learned what to say, what not to say, how preparedness is key and how to think quick on my feet,” said Drinkard, a digital and broadcast journalism major who served as the student manager for both broadcasts. “In the field of broadcasting, being able to roll with the punches is something that everyone must learn eventually, so it's better to figure that out now rather than later.”

The communication skills gained from the live-stream broadcasts are invaluable, according to Gaines, a double major in economics and political science who is also pursuing a Sports Media Certificate.

“Communication is so critical, and this is a great experience with communicating— you are forced to think your feet for three hours and not only just fill air but actually communicate relevant information to fans at home,” Gaines said. “You want to provide those watching more than just what they can see on the screen. That takes a lot of preparation, knowing both teams extremely well and effectively delivering that information throughout the course of the game.”

Next semester the PlayOn! live-streaming platform will be used for the first time to teach on the curricular level, Michaelis said. Eighteen Grady Sports Media students enrolled in Sports Broadcast and Production will produce broadcasts of six Clarke Central High School sporting events under the direction of instructor Bob Houghton, president of the Georgia Association of Broadcasters.

Additional NFHS Network live-stream opportunities will continue to be made available to other interested students through the Grady Sports Bureau, Michaelis noted.

“The access that students have to these sports events, the fact that they can do it from A-Z, and that this platform gives them the latitude to be very basic or very advanced and learn from mistakes along the way—it’s a phenomenal opportunity,” she said. “We’re really happy to be able to offer it to them.”