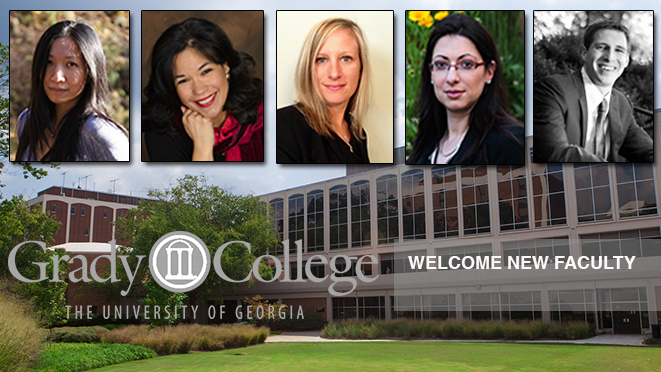 Continuing the tradition of excellence in faculty instruction, Grady College is proud to welcome five new faculty this fall:

She has a bachelor’s in advertising from Peking University and a master’s and doctorate from the University of Missouri.  Her research interest is in the area of crisis communication and strategic conflict management, as well as how emotions influence strategic communication decision-making and the response of the public.

In August, Jin accepted the Krieghbaum Under-40 Award at AEJMC which honors AEJMC members under 40 years of age who have shown outstanding achievement and effort in all three AEJMC areas: teaching, research and public service.

Kim Landrum joins the AdPR Department as a lecturer of entry-level creative courses including Graphic Communication and Advertising Message strategy.

Landrum graduated from Auburn University with a degree in interior design, and received her master’s in photography from the UGA Lamar Dodd School of Art.  She has more than twenty years of experience communicating in visual language, crafting identities and designing in a variety of mediums including print, web and large-scale installation design.  Previously, she has taught traditional and digital photojournalism, information graphics, newspaper design and layout at Grady College, and digital design, type and image, and graphic design survey at UGA’s Lamar Dodd School of Art.

She has been honored with two Summit Creative Awards for print design.

Landrum is also a trainer for youth triathlons through Dream Team Triathlon.

Maria Len-Ríos (MA ’95) joins the AdPR Department as an associate professor of public relations.  She returns to UGA after earning her master’s from Grady College in 1995.  For the past 10 years, Len-Rios has taught public relations and cross-cultural journalism courses at the Missouri School of Journalism, as well as the University of Kansas and Georgia Southern University.

Her research interests focus on inequalities in public relations and health communication.

Len-Ríos, with colleagues and doctoral students, has earned more than nine Top Paper awards in national and international academic conferences across multiple areas.  Most recently, she won second place for the ComSHER Article of the Year Award awarded at the August 2014 AEJMC conference for her paper, “Journalistic Use of Exemplars to Humanize Health News,” published in Journalism Studies.

Len-Ríos has a bachelor’s degree from Macalester College, St. Paul, Minnesota and a doctorate from the University of Missouri.

Ivanka Pjesivac joins Grady College as an assistant professor in the Journalism Department.  She recently earned her doctorate in journalism and electronic media from the School of Journalism and Electronic Media at the University of Tennessee.

Pjescivac’s research interests include international communication, media systems and changes in the world, media systems in countries in transition, and online political discussions.

In 2012, Pjescivac was recognized at AEJMC for having the top student paper, “Trust in News Media and Power Distance: Comparative Study of America and China,” and was the recipient of the Outstanding Graduate Student Research Award from UT.

John Weatherford joins the New Media Institute as a lecturer.  Although new to Grady College, Weatherford is not new to UGA as he has spent the past eight years as a lecturer in the English Department in Franklin College.  During that time, he taught courses including Digital Media Literacy, New Media Storytelling, English Composition, Writing for Nonprofits and TEDxUGA.

Weatherford has a bachelor’s and master’s in English from UGA.