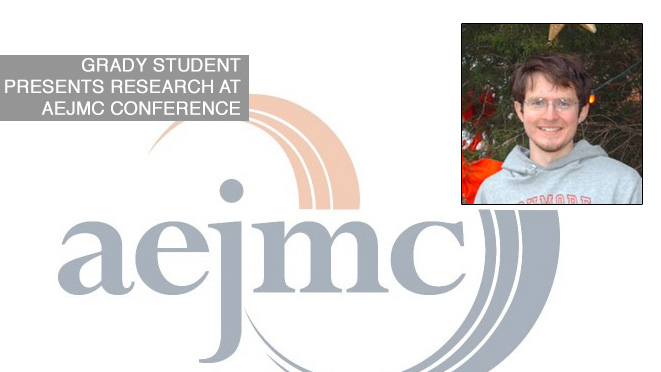 A former Grady student was selected to present his research at the annual Association for Education in Journalism and Mass Communication (AEJMC) conference, where he won the second place student paper award in the Entertainment Studies Interest Group.

Matt Burns (ABJ '13) focused his research on college students' online and offline engagement with television shows from their youth and why that engagement continued. He found that college students have little interest in spending money on older TV shows, but they are very likely to talk about them with their friends in person and online.

Burns first became interested in the topic after an internship with the Digital Programming department at Nickelodeon.

“I knew college-aged people like to post online about these things, but I was more interested in the bigger picture of how they are engaging and why,” he said. “I couldn't find any clear data on it.”

“AEJMC was more of a long-shot, and I spent a lot of time editing and fixing the paper based on Dr. Alexander's notes before it was ready to submit,” Burns said. “I submitted online, forgot about it and two months later got an email that I was accepted and would get to present it in Washington, D.C., in August.”

Burns was one of two undergraduate students to present competitive papers at the conference and also received second place for his paper “The Internet's Role in Sustaining Engagement with Children's Television.”

After graduation, Burns was hired by the team he interned with at Nickelodeon, where he is currently a digital video coordinator. He is also working on compiling an oral history of the development and production of kids' television programs, a project he began during his time at Grady.