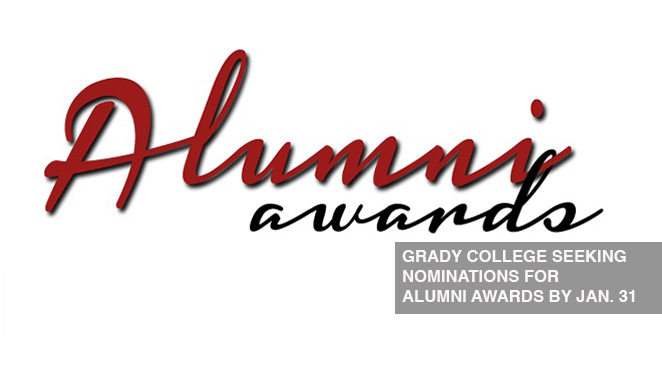 The University of Georgia Grady College of Journalism and Mass Communication is seeking nominations for its annual Alumni Awards.  The deadline to nominate an outstanding alumnus for a 2015 Grady College Distinguished Alumni Award is Jan. 31 at 5 p.m.

Four awards are presented each year to successful alumni who have made significant contributions to their professions since leaving Grady College. The 2015 Alumni Award winners will be honored at the Grady College Centennial Gala on April 18 in Athens.

The four award categories include:

The Henry W. Grady Award for Mid-Career Achievement— The Grady award honors a mid-career graduate who has been successful and influential during his/her career.

The John E. Drewry Award for Young Alumni Achievement— The Drewry award honors a graduate with 10 years or less of experience who has seen exciting and productive career developments in the years closely following graduation.

The Distinguished Alumni Scholar Award— The Alumni Scholar award honors an alumnus for excellence and sustained contributions to scholarship in journalism and mass communication education.

Questions can be directed to Diane H. Murray, director of alumni relations and outreach, 706-542-5038, murrayd@uga.edu.