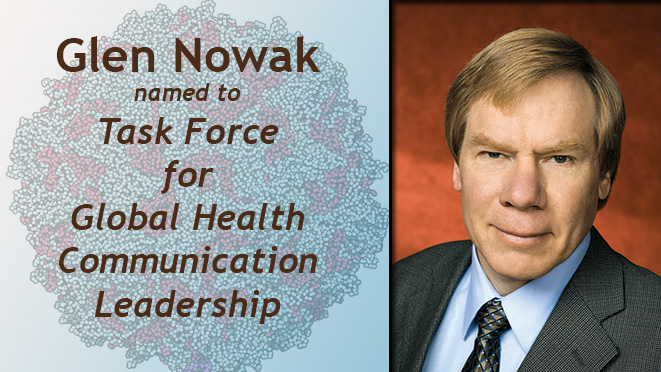 Glen Nowak, director of the Grady College Center for Health and Risk Communication at UGA, has been tapped to provide communication leadership for a key part of the global polio eradication effort. As part of a six-month assignment with the Task Force for Global Health, Dr. Nowak will be helping develop and implement a communication strategy for a worldwide effort to get 124 countries to introduce at least one dose of inactivated polio vaccine (IPV) to their childhood immunization programs by the end of 2015.

The project Nowak is involved in deals with the transition from OPV to IPV, and involves assisting a number of project partners. Major partners in the project are the World Health Organization (WHO), UNICEF, the Bill & Melinda Gates Foundation, the Centers for Disease Control and Prevention (CDC), Rotary International, PATH International, the GAVI Alliance and the Task Force for Global Health. In 2014, all of the 124 countries currently using only OPV vaccines are being asked to add IPV to their childhood immunization programs and to develop plans for doing so. The plans are to be implemented by the end of 2015.

“This appointment is a great opportunity to be involved with a really significant, worldwide public health effort,” said Nowak. “The eradication of polio will be a huge public health achievement. Being involved in this effort is a great way to contribute to improving lives and an opportunity to raise awareness of Grady College and UGA in the international public health arena. Getting involved in projects like this is also a great way to stay current with what organizations are looking for in terms of health communications-and that's knowledge we can use to inform our programs, teaching and research.”

Nowak, who spent 14 years directing communication and media relations programs at the Centers for Disease Control and Prevention before re-joining the Grady College faculty in January 2013, will spend a majority of his time assisting the partner organizations in developing communication and advocacy plans, messages and materials. The contract also allows him to remain actively involved with teaching Grady College courses during this time.

“Dr. Nowak's appointment to the Task Force for Global Health is a testament to his stature in world health communications,” said Charles Davis, Grady College dean. “This appointment is a signal achievement for the Center for Health and Risk Communication, as it will further deepen Dr. Nowak's already enviable network and provide graduate students working in the center with incredible real world communications problems to help solve. We're delighted to have a health communicator of such international stature at Grady College, adding to a deep team of scholars focusing on health messaging.”

About Dr. Glen Nowak
Glen Nowak is a professor of advertising and Public Relations and director of the Center for Health and Risk Communication at Grady College. Prior to joining the Grady faculty in Jan. 2013, he worked 14 years at the Centers for Disease Control and Prevention. He spent six years as director of media relations at CDC and six years as communications director for CDC's National Immunization Program. He has experience in managing and implementing health and risk communications programs, media relations, health information campaigns and social marketing. Prior to joining CDC in 1999, Nowak was an associate professor of advertising and communication at the Grady College. Nowak received his B.S. in 1982 from the University of Wisconsin-Milwaukee, with majors in both economics and communications. He continued his studies at the University of Wisconsin-Madison, where he subsequently earned an M.A. degree in journalism (1987) and a Ph.D. in the field of mass communications (1990).