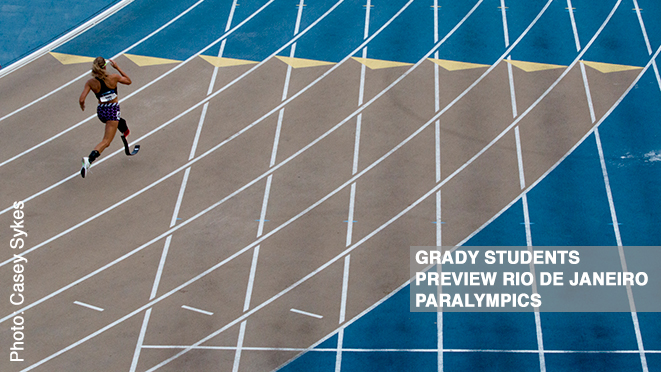 The Paralympic Team Trials give athletes a feel for what the competitive experience will be like in Rio de Janeiro later this summer. But, athletes are not the only ones benefiting from the trials. Student journalists also have the opportunity to hone their skills and expectations during the trials in preparation for their own experiences in Rio de Janeiro.

That was the opportunity for three Grady College students who traveled to Charlotte, North Carolina, early July to cover the Paralympic Team Trials in track and field and swimming.

Photojournalism students Jenn Finch, a journalism major from Woodstock, Georgia, and Casey Sykes, an entertainment and media studies major from Augusta, Georgia, were joined by Grady Sports Media student Kendra Hansey, a statistics major from Athens, Georgia, to report on the trials. They gained experience by writing features and taking pictures that were offered to the Associated Press and other media.

“Having the opportunity to go to the trials and experience it and start to see how major events like this work was invaluable,” said Johnson, who helped coordinate the trip to Charlotte. “This was an opportunity for some of them to get a little taste of it and sort of ramp up to it and practice a little bit.”

The students all agreed that the biggest benefit of their trip to cover the trials was starting to establish relationships with some of the athletes that hopefully will continue to grow in Rio de Janeiro.

“The biggest surprise to me was how the athletes were very accessible,” said Hansey. “They were all extremely friendly. Covering the Paralympic trials gave me the advantage of introducing myself in advance to some of the athletes and coaches we will most likely write about. Hopefully this will work to my advantage in Rio when I need to talk to them for a story. The trials also helped me figure out how to ask the important questions in a limited amount of time.”

Finch agreed. “I am really excited to see the athletes that I covered in Charlotte who are continuing on to Rio. It’s awesome to be able to document so much of their journeys.”

Getting to know the stories of the athletes is especially important in covering the Paralympics.

“There’s not as much a demand for the who won, who lost, play-by-play type stories on the Paralympics,” Johnson explained in comparison to the Olympics. “It’s much more about the characters and the personalities and the technology that’s involved. So the students will be focusing much more on the individual athletes as opposed to their athletic performances and looking at the deeper stories.”

The other advantage of sending the students to Charlotte was that it gave the Associated Press an opportunity to see what the kids are capable of producing. The students will be supplying stories and photographs to the Association Press during the Paralympics for potential distribution through its outlets.

“The fact that the Washington Post ended up picking up a byline story and multiple photos from theses students says an awful lot,” Johnson said of the trial run.

“I'm sure I sound like a rookie, but when I realized that my photo was on USA Today and that so many people were going to see this story and read about the Paralympics, that felt pretty awesome,” said Finch about the rewards of the Charlotte trip.

The students were joined at the team trials by two faculty members from Penn State, Curt Chandler and John Affleck, who advised them. Three Penn State students were also in Charlotte covering the trials. Penn State will also send a team to report in Rio de Janeiro.

Sykes, Finch and Hansey all agreed that their experiences were enriched by working with the Penn State students and faculty.

“The Penn State crew was incredible,” Finch said. “We quite literally could not have done it without them.”

Sykes added, “I learned a lot, especially from Curt Chandler. He explained to me that the best photos are often made at the precise moment when something significant happens; this is when emotion is completely raw and involuntary, and therefore, most relatable by nature. It's the same principle that makes candid photos more cherished than yearbook portraits, and it was an invaluable lesson to learn and apply to photojournalism.”

Between now and the trip to Rio de Janeiro in September, all nine Grady students will be gaining advice through a Facebook group and listening to online chats with journalists who have covered the Olympics. The students will be studying how to research stories, look for different angles and gain access to athletes.

Learning to cover the Paralympics is an education on its own. “It’s much more complex than the regular Olympics,” Johnson explained, “because, instead of just having the 100-meter dash where it’s the fastest person to run 100 meters, there’s a whole bunch of different classifications based on disabilities. The students have to learn to sort out all the classifications and piece them together.”

That’s a challenge these students look forward to in Rio de Janeiro.

“One of the things I love most about photojournalism is also a major factor of the Paralympics: variety,” Sykes said. “There are so many events that I didn't even know existed until recently that are so intensely interesting, so I'm excited to visually translate that experience to others. I expect it will be difficult to get bored.”