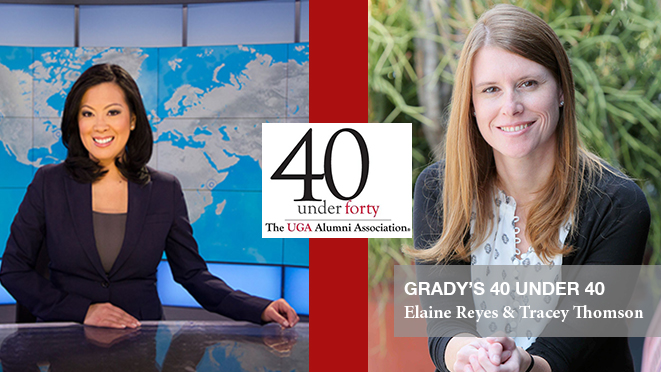 Selections were based on the graduates' commitment to a lifelong relationship with UGA and their impact in business, leadership, community, artistic, research, educational and/or philanthropic endeavors.

Grady College will release profiles of two winners each week leading up to the ceremony on Sept. 18.

What class at Grady College did the most to prepare you for your current career?
Grady Newsource, formerly known as University News during my time at Grady….also known as David Hazinski's show class. This class basically gave me two years of professional television experience by the time I graduated. NOTHING prepares a budding journalist better than actually DOING the job day after day. I did real stories in Athens that went on my resume tape, which led to my first Anchor/Reporter job in Savannah, Georgia.

What advice do you have for today's Grady College students?
Your internship can make the difference between you getting a job after graduation or not. Make the most of it and make yourself indispensible to the professionals you're helping. I will be more likely to help an intern find an entry-level job if they work and standout as a fellow team member.

What advice do you have for today's young professionals?
Be open to criticism, welcome it gracefully and learn from it. Don't take it personally. Most of your bosses and colleagues are offering this type of feedback so you can get better. If you already think you know everything, you'll never progress. And I guarantee, you DON'T know as much as you think you do.

What class at Grady College did the most to prepare you for your current career?
Growing up, I always knew that I wanted to have a career in television. However, it wasn't until I took a screenwriting class at UGA that I realized writing for TV was a path I'd eventually like to pursue. Not only did I learn the fundamentals of writing, I discovered that I had a talent for storytelling and was fortunate enough to be able to turn that talent into a career.

What experience during your time at Grady College had the biggest influence on where you are today?
Television is a collaborative process. It takes many different departments working in conjunction to put a show on the air. While at UGA, I did several student projects as well as volunteered on the production team of Newsource. Not only did this experience prepare me for my initial career at CNN, it has helped as I've moved on to more creative positions within the industry. Having a working knowledge of the production side of things allows me to script an episode that can be shot and produced within the specific time/set/budget constraints, which ultimately makes everyone's job on the show much easier.

What advice do you have for today's Grady College students?
People often choose careers based on income potential. Don't. You will spend countless hours at work. If you don't enjoy what you're doing, no amount of money will ever change that. Pursue your passion and don't be afraid to make a change to ensure your happiness. You won't regret it.