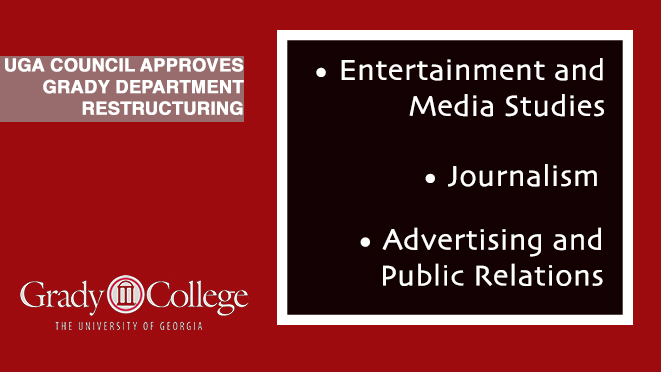 The University of Georgia Council has approved a departmental restructuring proposed by the faculty of the Grady College of Journalism and Mass Communication. The restructuring welcomes digital broadcast students into the Journalism Department, creating a single, digital-first department. It also renames the former Telecommunications Department to Entertainment and Media Studies. These changes will provide Grady College students a more flexible and comprehensive education in multiple journalistic platforms, as well as providing a more focused curriculum in narrative storytelling and media studies.

The restructuring will have a final vote by the University System of Georgia Board of Regents at its next meeting April 14-15, 2015.

“This faculty-driven process represents a huge step forward for Grady College,” said Charles N. Davis, dean of Grady College. “Restructuring has in turn initiated the development of new curriculum, so we feel as though we've turned a new page in many ways. We are excited about the possibilities for multimedia journalism and more robust experiential learning. I'm especially proud of the faculty, who had to compromise and negotiate to get this done.”

Journalism Department
“The entire journalism faculty, including those who were formally broadcast and formally print, came together and essentially spent a year working on this curriculum,” Janice Hume, head of the Journalism Department, said of the new structure. “We spent a lot of time discussing what we wanted Grady students to look like and what skills we wanted them to have. We are adamant that we want our students to be strong writers, strong reporters and strong visual communicators who feel comfortable performing on multiple platforms.”

The new Journalism curriculum is a dramatic departure from the previous classes and includes the following curriculum breakdown:

▪ Semester 1: focus on reporting skills, information gathering and writing across different platforms
▪ Semester 2: includes a law class, a choice between different technology topics classes like video production and coding, and a conceptual class including topics such as ethics, race and gender studies and social effects of mass media
▪ Semester 3: includes multiplatform story production
▪ Semester 4: ends with a capstone experiential course.

Many of these class projects will air on Grady's evening newscast, Newsource, and its related website www.gradynewsource.uga.edu.

There is also flexibility for journalism students to take a selection of specialty courses focusing on topics like critical writing, photojournalism and management.

The restructuring began in 2013, as Davis began a yearlong strategic planning exercise that culminated in April 2014 with a faculty vote. The faculty made clear that journalism was changing rapidly and that Grady needed to reposition itself for a digital future.

“Our industry is changing so rapidly and our employers want to hire people who are comfortable telling stories in a variety of different ways to a variety of different audiences,” Hume said. “Having a television major and a magazine major, etcetera, just doesn't make sense any more because that's not how the media industry is. This new curriculum is something we had to do to make sure our students remain competitive and relevant.”

“This new curriculum allows us to be really nimble because we don't know what's going to happen in the next five years,” Hume said, “but we are ready for it based upon the skeleton of the curriculum that can change with the times.”

“The students we have are interested in fiction and entertainment,” Kavoori said. “This really captures a student need and a market demand. Entertainment, especially film production, is a vital part of Georgia's economy and the creation of this major positions us to address that market need.”

Many of the classes in the Entertainment and Media Studies program build on existing classes from the former Mass Media Arts program.

The core classes will consist of Introduction to Media Studies, Writing for Digital Media, Introduction to Production Basics and Elements of Narrative. Students then will be able to choose from six elective classes from an offering of 22 classes, allowing them to focus on skills ranging from documentaries and advanced production to advanced writing and advanced research.

“These classes represent a rapidly diversifying media landscape where we really have to focus on a number of emerging trends in entertainment media,” Kavoori said. ” We focused on giving our students a core of storytelling and let them choose their own path.”

This new curriculum positions students for a competitive and changing market.

“The entertainment media industry is the fastest growing segment of the media industry and it is also the most fragmented,” Kavoori continued. “We have people developing social media games and viral video and short fiction across multiple platforms, but also those who have a desire for long-form narratives. Our students will be trained in not just the tools of storytelling but in the narrative possibilities of entertainment media. Our students will be poised to tell what is the nature and shape of the story as it emerges in the intersection between culture and industry.”

The new curriculum will begin in fall 2015 in the Entertainment and Media Studies Department and in spring 2016 in the Journalism Department.