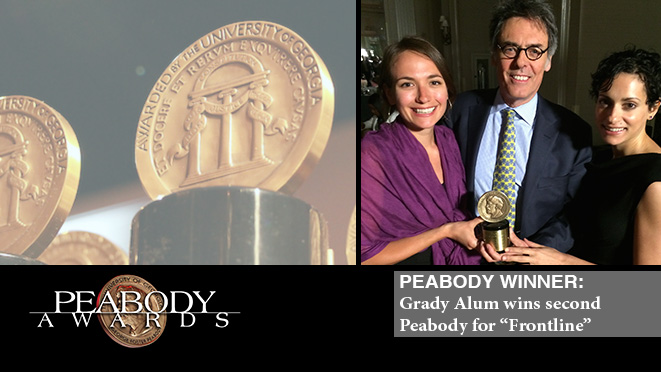 Little did Lauren Ezell Kinlaw (ABJ ’08, BA ‘08) know when she sat in the seat of a Peabody Awards student judge in 2008, that she would be sitting in the winner’s seat six years later. Kinlaw, an associate producer for the PBS investigative series “FRONTLINE,” won her first Peabody Award for “League of Denial” and followed this year with another Peabody Award for “United States of Secrets.”

Kinlaw answered some questions via email about her experience as a Grady College student, what it was like to be a Peabody Awards student judge and what it means to be recognized by the Peabody Awards in her professional career.

Grady College: Since you were a student judge of the Peabody Awards when you were at Grady College, you have a unique perspective.  Do you have any special memories of being a judge?

Lauren Ezell Kinlaw: I remember the organizers lining all of the student judges up to escort each winner onto the stage as they were announced. The teams from “Mad Men,” “The Colbert Report” and “30 Rock” were there and we were all pretty star-struck by the whole thing, but I remember I just had my fingers crossed that I'd get to escort Michael Kirk's “FRONTLINE” team!

GC: Did you have aspirations to win a Peabody when you were a student?  Has the goal of winning a Peabody guided your work?

LEK: To me, the Peabodys represent a gold-standard in telling excellent stories that truly matter. As a student I certainly always hoped I'd be able to contribute to that type of work.

GC:  You won a Peabody Award last year for “League of Denial.” Do you think about that when you work on documentaries now and does that guide decisions you make in production?

LEK: Having had the opportunity to contribute to two Peabody-award winning films as an associate producer has been amazing and something I never imagined I'd get to do. It's truly an honor to contribute to work you know has value and will have an impact. I work hard to contribute the best way I can to each project I work on, but I don't really think about future awards.

GC: In your opinion, what is it about “United States of Secrets” that sets it apart from other “FRONTLINE” episodes?

LEK: That's a tough one. I really believe whole-heartedly in the kind of work that “FRONTLINE” does. I do think Michael Kirk's team (they produced both “League of Denial” and “United States of Secrets”) is especially talented at tackling big, important stories in a smart way with a focus on great narrative story-telling that makes it unique, but each “FRONTLINE” producer has a different style and they are all doing great work.

GC: When you were a student, can you identify any special classes or projects that you worked on that helped you get to where you are today?

LEK: I took a broadcast news course with Professor Christa Ward that had a big impact on me. Dr. Ward encouraged me to apply for an internship with “FRONTLINE” when I spoke with her about my interest in current affairs documentary, and I probably wouldn't have gotten there without her doing so. I also took a documentary seminar with Professor Jennifer Smith, which gave me some great hands-on production experience.

GC: Please tell us about your extra-curricular involvement at Grady College and your  career path after graduation.

LEK: I double majored in International Affairs and Telecommunications at UGA. I was a member of DiGamma Kappa, and also organized educational and fundraising events for UNICEF. I also had the opportunity to go on the Cannes Film Festival study abroad trip, where we attended screenings, Q&A's and met industry professionals. While I was at UGA, I had an internship with the Post Production Outpost at “FRONTLINE” in Boston where I got some great hands-on experience and had the chance to meet a lot of the “FRONTLINE” staff and producers, including Michael Kirk and the rest of his team at Kirk Documentary Group. When I was a student Judge in 2008, Michael Kirk was winning an award for “Cheney's Law,” so I reconnected with him and his team there. They needed a production assistant a few months later and I moved to Boston for the job. After working as production assistant for two years, I became an associate producer for them.

GC: “United States of Secrets” deals with some pretty charged topics, as many “FRONTLINE” episodes do.  It takes a special amount of courage to work on reports such as these.  Does this strength come from your education, experience, or both?

LEK: It's truly an honor to have contributed to such big, important stories. You can't really let fear come into the equation when you're entrusted with that type of work. Grady gave me a great foundation of working-industry knowledge and I continue to learn new things on the job every day.

GC: What are you working on now?

LEK: I moved to the UK last fall and I am pursuing freelance opportunities here. I'm currently contributing to a CNN documentary film series on historic presidential campaigns with RAW TV in the UK and Kevin Spacey's Trigger Street Productions that will air in 2016.

GC: Do you have any other comments?