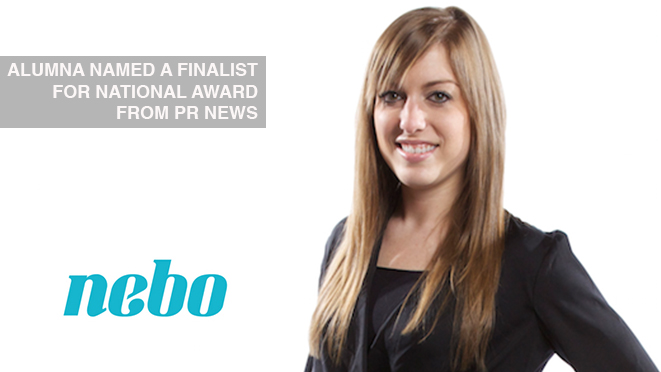 Jenna Thomas, director of digital public relations and social media marketing at Nebo, was recently selected as a finalist in the Agency PR Professional of the Year category at the 2014 PR News PR People Awards. Other finalists include esteemed executive vice presidents, presidents and owners from top tier agencies across the nation.

Thomas graduated from UGA’s Grady College in 2006 with a bachelor’s degree in journalism with an emphasis in telecommunication arts. Since then, she has successfully spearheaded countless initiatives for locally based companies thanks in part to her passion and leadership.

Winners will be announced at the PR People Awards Luncheon on Dec. 9 at the National Press Club in Washington, D.C. The ceremony celebrates the individuals who set benchmarks of excellence in public relations, recognizing the top innovators and PR leaders from agencies, corporations and nonprofits. PR News hosts elite award programs throughout the year, but the PR People Awards is the time for industry individuals to stand out for their outstanding contributions in the last year.

This success has led to Nebo’s PR services becoming one of the agency’s signature areas of competency with her culture first, results-driven management and communications philosophy.

“Jenna is an absolute PR machine, but she also gets our human-centered approach to marketing in a deep way,” said Brian Easter, CEO at Nebo. “Her passion, talent and drive inspires colleagues and clients alike, and we’re extremely lucky to have her on the team.”

Thomas has even helped land local news placements when a coworker’s dog was stolen. The coverage led to a community resident recognizing the puppy, calling the station and reuniting the dog and family.

To learn more about Nebo and its digital public relations services, visit http://www.neboagency.com/interactive-marketing-services/digital-pr/.