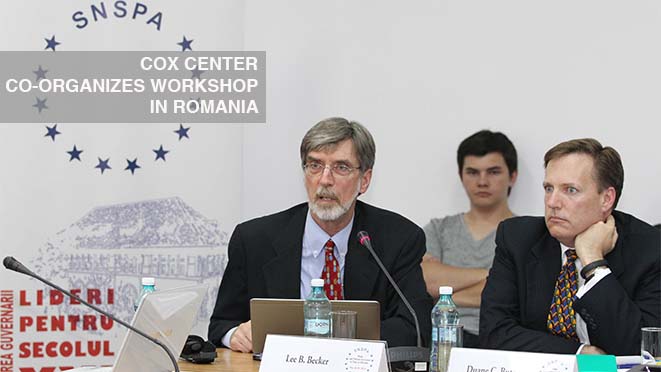 Powell A. Moore, an expert in public affairs, national security and international relations, advised communication professionals, students and faculty at a gathering in May in Bucharest, Romania, to watch Russian President Vladimir Putin carefully.

Ioan Mircea Pascu, Romanian member of the European Parliament, where he is vice-chairman of the Committee on Foreign Relations, offered similar advice, saying that NATO should not disengage.

The two speakers were part of a two-day workshop on Media and Political Institutions in Times of Elections organized by the Center for Research in Communication of the National University for Political Studies and Public Administration in Bucharest and the James M. Cox Jr. Center for International Mass Communication at the University of Georgia.

The workshop began with a session on national security and defense, reflecting the tension in the region because of Russia’s annexation of the Crimea and continued pressure on Ukraine, with which Romania has two borders.

Russia also plays a role in Moldova, where it has troops stationed in the breakaway region of Transnistria. Much of the population of Moldova is Romanian speaking, and the country was at one time a part of a greater Romania.

Moore, a member of the Board of Visitors of the Cox International Center, was part of the American team at the conference. Moore served as assistant secretary of defense for legislative affairs under President George W. Bush and subsequently was the representative of the U.S. Secretary of Defense to the Organization for Security and Cooperation in Europe, based in Vienna.

“With Russia, it is not possible to have a win-win scenario,” Moore said. “There are only winners and losers.”

“We assumed Russia was ready to integrate into the western world.” Pascu said. But the country is “suffering from a loss of empire” and not ready for western integration.

Pascu is former Romanian Defense Minister and a former dean of the faculty of international relations at the National University for Political Studies and Public Administration.

Duane Butcher, deputy chief of mission for the U.S. Embassy in Bucharest, made comments at the opening of the workshop, congratulating and thanking the Center for Research in Communication and the Cox International Center for organizing the event.

Paul Singer, deputy managing editor for politics and government at USAToday, told the group in a subsequent session that he and other journalists “are the ethics police” and that journalists have impact by exposing corruption. Singer focuses most of his time in the U.S. examining corruption in Congress, he said.

Corina Vintan, founder and managing director of Links Associates, a communication consulting firm, and former spokesperson in the Romanian Ministry of Foreign Affairs, told the group that “lobbying is part of the democratic process that is especially important in Romania.”

Vintan said that “we are trying to make the process in Romania as transparent as possible.”

Other participants in the workshop included Adrian Ursu, a journalist at Atena 3 TV in Bucharest, and Cristian Pantazi, editor-in-chief of HotNews.ro.

Lee B. Becker, director of the Cox International Center, talked about declining coverage of local elections in the U.S. by the traditional media and the importance of citizen efforts at informing people in their communities about electoral issues.

Tudor Vlad, associate director of the Cox Center, served as a session moderator.

About 40 people attended the opening session, with the subsequent sessions attended by about 30 persons.

The workshop was held May 28 and 29 at the National University of Political Studies and Public Administration in Bucharest.

The Cox Center is an international outreach unit in the Grady College of Journalism and Mass Communication at the University of Georgia.