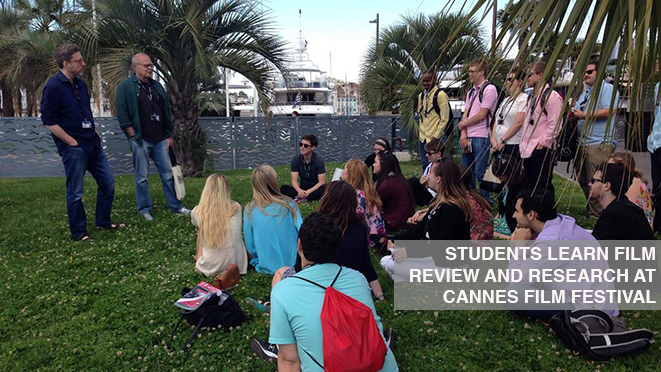 Attending one of the world’s premier film festivals, hobnobbing with celebrity actors and directors and studying several weeks along the French Riviera sounds like a pretty good way to earn class credit, doesn’t it?  The 28 students who participated in the UGA Cannes Film Study Abroad program sponsored by Grady College think so.

The students, many of whom are studying journalism, telecommunications, film, and related fields, are required to take two classes during the four-week program: “Critical Writing and Reviewing” and “Telecommunications Research.”  In the “Critical Writing and Reviewing” class, students are required to view movies, attend festival seminars and write nine film reviews during the program.  In the “Telecommunications Research” class, students are required to analyze three films based on class topics including the marketing of a film, audience research, and distribution strategies, taking into consideration the social, political, and economic climates of various worldwide marketing territories.

“The program is an important learning experience for Grady students,” said Nate Kohn, program director and Grady College telecommunications professor.  “In addition to seeing films they might never see elsewhere, they meet industry professionals one-on-one and learn how the industry really works.  Many students discover career paths at the festival in what proves to be a life altering experience for many of them.”

And, there were chance meetings, too.

“By pure chance, I ended up sitting next to the managing editor of IMDB at the start of the festival,” said Cannes student Mike Young, a recent Grady graduate in mass media arts.  “I had a great chat with him about the industry, the festival, and what sort of advice he had for me as a newcomer to the arena.  This is the sort of meeting that would only happen at Cannes.”

For many students, this is a defining experience in what direction their career will take.

“I've always felt some reluctance towards entering the film industry versus TV, so I approached Cannes with relative indifference,” said Jake McLaren, a fourth-year telecommunications major. “But, being at the film festival opened my eyes to the business side of the industry, which, I've come to realize, is more intriguing than I'd expected.”

“I've always known that film, particularly documentaries highlighting and exploring the creative process, was going to be a part of my future, but being at Cannes only solidified that goal and gave greater immediacy to it,” added Young.  “There are a lot of established directors and producers at Cannes, but there's even more who are just starting out.  The winner of the jury prize was only 25 years old!  Cannes showed me that there is no better time to start than now, and that with hard work, good training (thank you, Grady!) and a passionate team around you, I have just as much potential to make it in this business as anyone else at the festival.”

“The trip exceeded my expectations,” McLaren concluded.  “Attending the Cannes Film Festival is mind-blowing in itself. In addition to that, you have the chance to meet new people and make great friends in the South of France. I can't imagine getting much more out of a study abroad experience.”