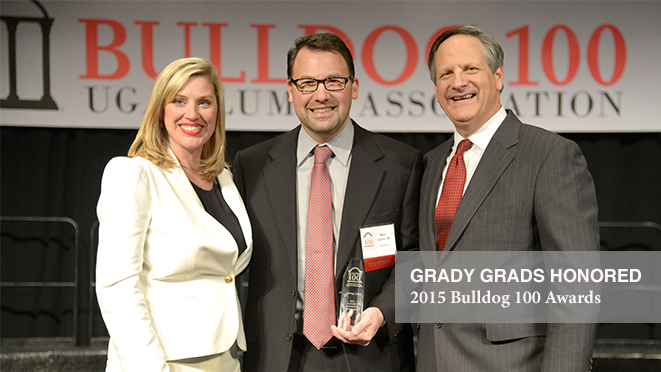 For the first time in the history of the Bulldog 100 program, a company led by a Grady College graduate has been recognized as the fastest-growing business owned or operated by UGA alumni.

Marc Gorlin (ABJ ’95), chairman and co-founder of Kabbage, Inc., said he was surprised and thrilled when the final rankings were released during the sixth annual Bulldog 100 Celebration Feb. 7, 2015 at the Atlanta Marriott Marquis.

Kabbage pioneered the first financial services data and technology platform to provide small businesses with financing. The company, based in Atlanta, uses data, such as shipping history, business volume, and social media activity, to extend short-term cash advances to small- and medium-sizes businesses online. Since Kabbage was founded in 2009, it has raised more than $100 million in venture capital, employs more than 80 individuals and serves more than 20,000 customers.

Following in his father’s footsteps as a serial entrepreneur, Gorlin attributes much of his success in business to communication skills he learned as a journalism student.

“Journalists are natural storytellers.” Gorlin said. “I credit Grady with a lot of my early abilities to communicate and tell stories.

“When you are starting a company—whether it’s  an accounting firm, a pool cleaning business, a digital agency or a financial services firm—you’re telling a story to your customers; you’re solving a problem for them,” he continued.  “The more effectively you tell that story, the better you’re going to do.”

Gorlin said the late Professor Conrad Fink’s classes helped him learn to think on his feet and adapt to different situations.

“Even though [Fink] knew that I would likely not be a journalist, he was just super encouraging,” the proud “Finkster” recalled. “You’ve got to be a go-getter to be a journalist, but you also have to be one to start businesses.”

In addition to his role at Kabbage Inc, Gorlin is founder and CEO of Roadie, an app-based neighbor-to-neighbor shipping community.

Other Grady alumni recognized during the awards ceremony were:

To be considered for the list, each company must have been in business for at least five years, experienced revenues in excess of $100,000 for the calendar year 2011, and be owned or operated by a UGA graduate who owns at least 50 percent of the company or be the CEO, president or managing partner.

The complete list of the 2015 Bulldog 100, photos from the event and 2016 sponsorship information are available at http://www.alumni.uga.edu/b100.