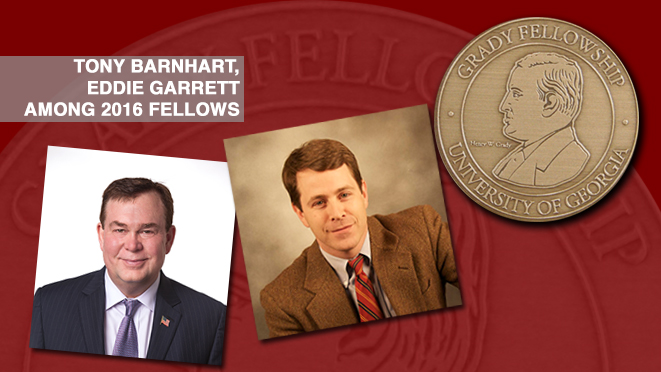 Tony Barnhart (M ’76) and Eddie Garrett (BSA ’06, MBA ’08) are among the seven honorees who will be inducted into the Grady Fellowship during 'Grady Salutes: A Celebration of Achievement, Commitment and Leadership' on May 6.

Established in 2008, the Grady Fellowship honors friends of the college whose accomplishments, friendship and service to the industries they serve have made a positive impact on Grady College. In addition to Barnhart and Garrett, this year’s list of honorees includes Jeff Gregor, Jan Jones, Brad MacAfee, Hala Moddelmog and Monica Kaufman Pearson.

He has also written five books about college football including “Dooley: My 40 Years at Georgia” and “From Herschel to a Hobnail Boot. The Life and Times of Larry Munson.”

Barnhart, a former national college football writer for The Atlanta Journal-Constitution, is currently a college football analyst on the SEC Network and is an active blogger with Gridironnow.com and through his website TonyBarnhart.com.

Among his numerous honors are the 2009 Bert McGrane Award given by the Football Writers Association of America, the 2009 Edwin Pope Vanguard Media Award presented by the Orange Bowl Association and the 2002 Furman Bisher Award for Media Excellence given by the Atlanta Sports Council.

He is a product of the journalism program at Grady College and is a regular speaker in Grady Sports Media certificate classes, as well as on campus.

Eddie Garrett is executive vice president, head of strategy for the global public relations and consumer marketing firm, Weber Shandwick. Based in Chicago, he is responsible for developing holistic communication strategies and providing senior counsel across the agency’s portfolio of clients.

Garrett has also served in similar roles and as a digital media strategist for Edelman, Porter Novelli and Turner Broadcasting, where is was part of the team that won a Peabody Award in 2005 for coverage of Hurricane Katrina and its aftermath. Garrett

He is a frequent guest lecturer on integrated marketing and currently serves as vice chairman of the board of jurors for the prestigious Peabody Awards. Additionally, he is a board member for The Museum of Broadcast Communications in Chicago, a member of the National Advisory Marketing & Communications Council for the Trust for the National Mall in Washington, D.C. and a member of the Grady Board of Trust.

Garrett earned a BSA and a MBA from the University of Georgia.

Read more about this year’s Grady Fellows inductees at t.uga.edu/2eJ.