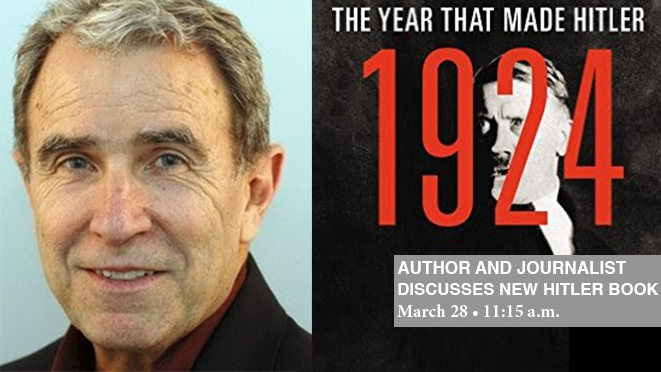 The University of Georgia Grady College of Journalism and Mass Communication will sponsor a visit by Peter Ross Range, author of the new book “1924: The Year That Made Hitler” on March 28 at 11:15 a.m. in the Russell Special Collections Libraries auditorium. The event is free and open to the public.

Range, who is a native of Athens, has been recognized in TIME Magazine and USA Today for his new book, a piece that focuses on its title year and the transformation of Hitler into the figure of fear and power that history recognizes today.

Hitler spent 1924 in Landsberg Prison after the failed Beer Hall Putsch, and it was while he was in prison that he wrote his infamous, rambling manifesto “Mein Kampf.” Everything that would follow his time at Landsberg—rallies, riots, death and mass murder—began in 1924, the year that made Hitler.

Range’s book was cited in USA Today in January 2016 as a “New and Noteworthy” book and by Amazon in February on its “Best History Books of the Month” list for the month. TIME Magazine Online has run an excerpt, and Range has been interviewed on NPR's Fresh Air as well as Pacifica Radio and Radio West.

Range, a world-traveled journalist and specialist in German affairs, has written extensively for The New York Times and National Geographic and is a White House correspondent for U.S. News & World Report. He was an Institute of Politics Fellow at Harvard’s Kennedy School of Government, a Guest Scholar at the Woodrow Wilson International Center in Washington and a Distinguished International Visiting Fellow at the University of North Carolina Journalism School.

Range grew up in Athens near Five Points and attended Barrow Elementary School and Clarke Central High School, then known as Barrow Street School and Athens High School. His father, Willard “Pete” Range, was a political science professor at UGA for more than 30 years.