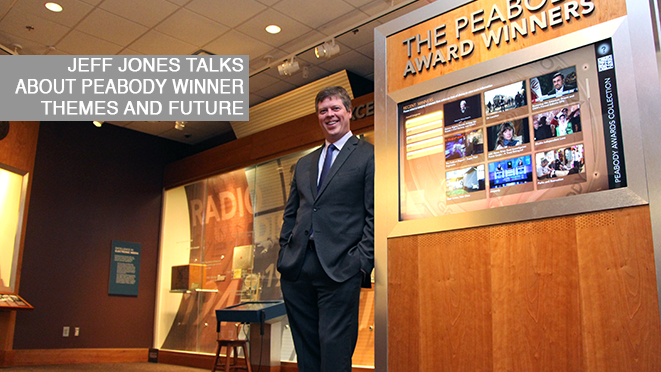 Jeffrey P. Jones is completing his first year as director of Grady College’s prestigious Peabody Awards, recognizing the best in electronic media and stories that matter.  He took time to share his perspectives about this year’s winners and some emerging themes.

The Peabody Awards ceremony takes place May 19, 2014 at the Waldorf-Astoria in New York City. Highlights of the ceremony will be televised on a special on Pivot TV on June 1.

Select winners from this year are referenced in parentheses below; a complete list of winners can be viewed at: http://grady.uga.edu/pdf/73rd_short_citations.pdf

Q: This year recognizes a record 46 winners.  What does that growing number of winners signify?

JJ: It’s five more than we had last year.  There is an array of things that are different every year and many new storytellers emerge.  This year we had entrants from content programmers that did not exist in the past.  Netflix (“House of Cards,” “Orange Is the New Black”), Hulu, Amazon — these entities were not players in the past.  We had more web entries than we have ever had.  We had quality international dramas that appeared and we had entrants like a viral video (“A Needed Response”) that won.

There are also new entrants such as Al Jazeera America (“Fault Lines: Haiti in a Time of Cholera,” “Fault Lines: Made in Bangladesh”) that appeared on the scene and showed that they were creating quality documentariehey have adequate resources to produce quality content and in this instance, Al Jazeera America had nothing to lose and put a lot of money into quality production.

So, the reason that there are more awards than we had 20 years ago is that we have more storytellers than we had 20 years ago.  The quality of what they are telling is high enough to merit inclusion as a winner.  What the Peabodys are really about is awarding quality storytelling, not artificially limiting the number of awards when there are more people telling better stories than ever.

Q: What were the biggest themes with this year’s winners?

We tend to see similar themes year after year, but sometimes they are treated differently.  Race is typically a theme dealt with (“The Central Park Five”). Gender issues and rape are present (“Independent Lens: The Invisible War”).  An atypical topic this year was gun violence (“This American Life: Harper High School”). And, another one that appeared with great frequency this year were concussions (“FRONTLINE: League of Denial: The NFL’s Concussion Crisis”).  Not just in the NFL, but through other sports, too.  There were also numerous entrants focused on schools (“180 Days: A Year Inside an American High School” and “Best Kept Secret”). Those are issues that can be dealt with in a variety of narrative situations like news or documentary.  We deal with race in radio shows with “The Race Card Project” or we deal with it in Harper High (“This American Life: Harper High School”) or documentaries such as “The African Americans” on PBS. Each of those offers different approaches to telling stories about race.

Q: This is the first year some digital platforms like Netflix have been represented.  How do you see this playing out in the future?

JJ: Netflix is not just a distribution platform.  It’s a content producer, and like HBO, it realized that its monetary success is dependent upon the production of quality, original dramas and comedies. Therefore they are going to continue to produce high quality work because that’s what drives subscribers to the network.  We will be seeing more of their materials, I feel confident.  Just as years ago we didn’t have the HBOs (“Life According to Sam”) and the AMCs (“Breaking Bad”) and the FXs (“The Bridge”), they now all regularly produce quality programming that quite often win Peabody Awards.

This year the viral video was the first of its kind to appear with “A Needed Response.”  That was something new—a self-created video that had more than 3 million views and went viral. All entries are user-submitted, and producer, Samantha Stendal’s father won a Peabody Award years ago.  So she was aware of the Peabodys through him. Anyone can submit anything to us.

We also recognized the positive relationship going on between television journalism and web journalism.  The report out of New Orleans, “Louisiana Purchased,” was as much a web-related report from NOLA.com/The Times-Picayune as it was WVUE-TV. Another instance is NBC News and their documentary reports “In Plain Sight: Poverty in America” on television and on the web. What we are seeing is journalism partnering with these websites to further their journalistic form.

And, yet, despite new entrants, public media and public television still play a very significant role in dealing with social and political issues. And the awards this year showed that.  Public media dealt with lots of pressing social issues, from rape and race and sexual equality, to veterans, the drug war, sports, and inner-city schools. In short, public media still is very important to the broader public discourse, despite the fact that we are recognizing other entrants and platforms as well.

Q: You even have an entry focusing on cooking this year with “A Chef’s Life.” Was that surprising?

JJ: “A Chef’s Life” is an interesting show in that they shot it themselves, the budget was very low and they don’t have a major corporate sponsor, yet they produced a show that has an enormous fan following. Last night I watched an episode on Apple TV through the public TV channel. It’s a show that’s part documentary, part reality show and part cooking show, so they are somewhat producing a hybrid blend there. The reality show aspects feature a woman working in a restaurant business while raising twins. The cooking aspects are similar to numerous other cooking shows on TV.  But part of it documents the farm-to-fork approach and culinary experiences that help capture the vanishing dimensions of Southern culture. Such a hybrid blend turns out to be a very powerful narrative, and we wanted to recognize that.

Q: Tom Brokaw will receive a Personal Award.  What does this represent?

JJ: Many of the first Peabody Awards in the 1940s were similar Personal Awards. Back then the board would hand out awards to people who they felt were making a difference and who they felt deserved recognition.  Over the years we tended to award individual programs or stories more than people who produced them, but we still think it is important to look across a body of work and recognize individuals who have made significant contributions to quality storytelling in broadcasting and electronic media.

Q: Do you see radio as a medium that is dwindling?

JJ: Not at all. Three radio shows won this year (“The Race Card Project,” “Reveal: The VA’s Opiate Overload,” “This American Life: Harper High School”). Radio is such a popular medium, but it typically doesn’t garner the press attention that television does. Yet radio continues to be a vibrant storytelling medium.  In fact, with the popularity of podcasting as a new technological means for “on-demand” listening, I would argue that radio is alive and well.

Q: Talk with us about the future of the Peabodys.

JJ: What’s clear is that the Peabodys will continue to navigate traditional broadcasting and digital media landscapes. Our job is to call attention to stories that matter. When we give out an award, we want to do more than just hand recipients statuettes. Rather, we also want to encourage citizens to view, listen, and engage with these stories. It’s important to us as a society to pay attention to the best that electronic media has to offer.  Peabodys, in essence, create a list of some of the “best” stories we should listen to and watch. I think what you can expect from Peabody is much more of a presence in legacy media and social media, with our calling attention to why these stories matter.

The second thing you can expect from Peabody is that because of our long history, we house America’s stories and America’s cultural heritage as manifest in the materials submitted to us for 73 years. All of those materials are in our archives. We hope to jog America’s cultural memory about who and what we are through these stories that have been told over the years.

Thirdly, it’s important to note that excellent storytelling is a global phenomenon (“Borgen” from Denmark, “Burka Avenger” from Pakistan, “The Returned” from France). Peabodys need to recognize stories not just from a US perspective, but stories from other cultural perspectives.

Finally, what we will continue to see is not more just in terms of the number, but more and different types of stories.  For instance, video games have increasingly become a site for complex narratives. Video games are doing amazing things in terms of creating quality, engrossing, immersive, and compelling projects. I am not predicting that we will give an award to a video game just yet, but that is an example of how, in digital environments, producers have new tools to tell very old stories about the human condition.  And, if it’s done well and it’s excellent, then the Peabodys will recognize it.