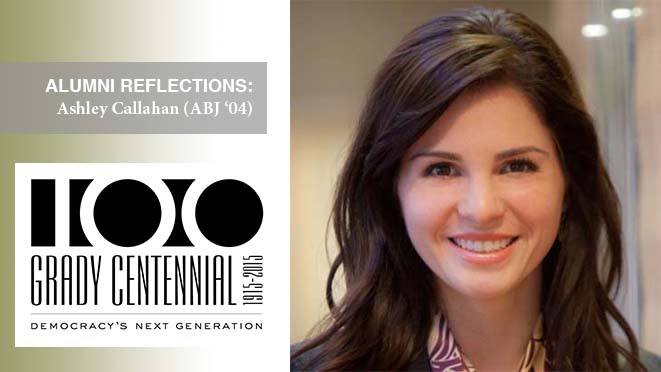 In the weeks leading up to the Grady College Centennial Weekend, April 16-19, we'll feature a guest blog post authored by a preselected alumnus/alumna. For ways in which students, faculty, alumni, donors and friends can share Grady College memories and photos in honor of the centennial year, please visit grady100.uga.edu.

Everyone hopes to find that one teacher: a John Keating of “Dead Poets Society” who sees something in you and decidedly makes an investment. It’s the professor who serves as a mentor, a model, the one who cares more about the person than the test score—ultimately the one who inspires.

At twenty years old I didn’t know that person was David Hazinski. A large Polish American and former network war correspondent, Hazinski was gruff and loud, and wore his large block initials emblazoned on his shirts and even his ring finger (this was before monograms were all the southern rage).

Hazinski was, in a word, intimidating.

In preparation for the first midterm of my broadcast news class, we were tasked with creating a rundown for a fictional newscast. Not for next week. Not even for tomorrow. This would be timed and it struck fear in the hearts of us young aspiring journalists. Soon we were all asking various “what ifs?” What if our computers die? What if we can’t access the AP Wire? What if the printers break?

Hazinski’s response: “I don’t care if you have to write it in blood. You will turn it in on time or you will fail.”

Setting expectations was never an issue.

As time went on, Hazinski upped our deadline pressures. He would clamor around the newsroom 20 minutes before show, crash metal trashcan lids together, flicker lights on and off and sing repeated renditions of “Row, Row, Row Your Boat.”

These stories may sound ridiculous—to the point of torture—but in reality these were acts of kindness. In the world of broadcast television, you live and die by multiple deadlines and if you can’t think under pressure, you won’t make it.

Just a few months ago, a fellow graduate and friend from the 2004 Grady Newsource 15 class called. She now works in the publishing industry where her boss interrupts her with repeated inquiries on the completion of a project. She recalled Hazinski’s deadline pressure and his warning, “stress makes you stupid.”

So we feared and revered him because we were learning real life lessons. He taught us how to write news copy, think objectively, land great interviews, and most importantly, think on our toes. In the often-dreaded postmortem reviews of our newscasts, he would lighten critiques with wit and good humor… and no one was off limits.

Many of my classmates will remember Professor Michael Castengera in mid- critique, getting heated by the minute. Running his hands through his white and gray hair (to where it stood almost straight up), his face was turning a scarlet shade of red. Before he could speak another word, Hazinski told him he was beginning to resemble the tip of a matchstick. We all fell to pieces laughing, Castengera included.

Though Hazinski maintained throughout college that we were not his friends, he knew each of us. At a large university, this was a unique experience. We began to think of ourselves as professionals working toward our common goal every night. We experienced comradery as he called us by our surname or nicknames (think military call and response).

On occasion after a great newscast, Hazinski would treat us to dinner, then exit full Hollywood-professor style, tipping his driving cap, walking out, umbrella in hand. To this day, he’s still known for throwing his students graduation parties.

But his teaching doesn’t end with the diploma. Hazinski has always been willing to review demo tapes (yes, mine were VHS back then). He has assisted me in the complicated realm of television contracts and even weighed in on how to navigate difficult dynamics in the work place.

When I decided to transition from a newsroom into corporate communications, I was nervous to tell him. But he was the first to celebrate my move and embrace the new model of storytelling and news. He, of course, found a way to integrate his students into what I was doing with brand publishing.

Throughout my career, he’s introduced me to some of my best friends, mentors and eventual colleagues. He’s practically family, having trained both my sister and me. So many doors have opened for me because of the network of NewSourcers he’s maintained.

I am thrilled to come back to Athens in a few weeks to celebrate the Grady 100. I am most excited about reuniting with Hazinski during Friday night’s field party at Smithonia Farm. Nearly four years ago, my husband and I married inside one of the farm’s large, brick barns. Amidst business trips to Bucharest and Karachi, Hazinski made sure to be there. One of my favorite photos from that day is of him surrounded by former students. Amanda Rosseter (also a Grady grad) pointed out how fun it was to see him in that moment, holding court again.

I spent four years earning a degree at the University of Georgia. But without a doubt, it was the instruction in the Grady College that set me on a path to success in more than one profession. In a world where journalism is critiqued and even sometimes maligned, David Hazinski showed us why it is a noble and essential venture, a calling. And man did we make great memories doing it!

Ashley Callahan is currently the content strategy and PR manager at Chick-fil-A Corporate. Before joining Chick-fil-A, she served in a similar capacity at The Coca-Cola Company as the global manager of digital communications and social media. Prior to joining Coke, she was the spokesperson and strategic communications manager at a major metro-Atlanta health system. Callahan is an award-winning journalist who reported and anchored at top-rated television stations across the country, including WSB-TV in Atlanta. She is a member of the Grady Alumni Society Board.

More Alumni Reflections:
There's always a friend to be found at Grady by Lauren Patrick (ABJ '07)
It's simple: The Grady family is forever by Michael Gray (ABJ '11)
How to celebrate a centennial: recommit, reconvene, re-engage by Brittney Haynes (ABJ '09)
It's easy to feel a sense of community at Grady by Shannon Sullivan Collado (ABJ '10)
Grady offers growth by Julia Hemingway (ABJ '14)
Grady grads get more than a basic education by Eric NeSmith (ABJ '02)
Lost and Found at Grady by Susan Percy (ABJ ’66)
Looking back on the Grady School with fondness by Rex Granum (ABJ ’72)