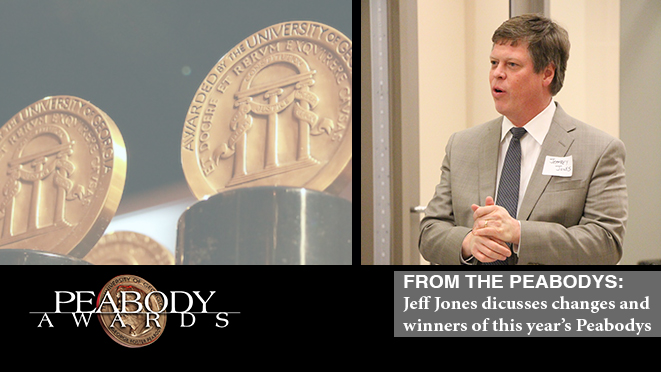 The following are excerpts from an interview with Jeff Jones, director of the Peabody Awards.  The Peabodys will be held May 31, 2015, during a Sunday evening dinner at Cipriani on Wall Street.  This marks a new venue and a new format for the awards show.

Highlights of Peabody Awards will be broadcast on Pivot-TV on June 21.

Grady College: Can you begin by sharing with us how many entries you received and the changes in the judging process this year?

Jeff Jones:  We had almost 1,200 entries this year and it was a strong stack.  We instituted a new online judging system, which was really great.  It facilitated a much-easier use for the board members.  We also employed a new system of faculty screening committees and it was a roaring success.  We expanded the board by bringing in senior faculty and their doctoral students from major research universities across the United States.  The recommendations they made were the ones that the Peabody Board also felt were very worthy.  There were 30 faculty members each with two PhD students from institutions ranging from USC to MIT.  They were the first line and the people judging documentaries were specialists in documentary and those judging children's programming are specialists in children's programming, etc.

GC: There will be 40 awards presented this year.  Can you share with us what is unique about this year’s winners?

JJ: Of course, a big cultural phenomenon this year was podcasts.  The popularity of “Serial” and the recognition that radio has moved from just broadcasting to really radio on demand is noteworthy.  Podcasting has done that, but what made “Serial” so interesting is imbedded in its name – it’s that you are creating an investigative piece that you want to listen to just like a soap opera and it has great cultural currency.  Last year was the first viral video; this year is the first-ever podcast recognized by us.

What Peabody does well is recognize complex storytelling in a way that, say the Emmy's, won't, but also newer, innovative programs on the horizon.  You can see that this year with “Last Week with John Oliver” and “Inside Amy Schumer.” These shows are very early in their run, but we recognized them.  Then there is quality storytelling like “The Honorable Woman” that is extremely artistic. And “Jane the Virgin,” which is a play on the telenovela, but done for a mass American audience.  So I think the Peabody Awards continues to recognize innovation as well as upstarts.

Peabody puts a stamp on things that are artistic and creative, but are a little more cutting-edge than the mainstream awards recognize.  When you look at the entertainment shows, you certainly see that.

The other big newsmaker this year was VICE News.  Early on, traditional news outlets wouldn't look on VICE and what it was doing as journalism, and we gave two awards to VICE this year which suggests it is precisely that.  It is a different style of storytelling, perhaps.  Their embedded journalist in ISIS, for instance, is a non-traditional western approach to war coverage, but it offers us a perspective, one that network news bureaus did not offer.

Another winner that I was pleased to see is Afropop Worldwide.  There is nothing else like it on radio or even television. America always venerates its own music, but it doesn't always appreciate how its music travels the world, is ingested into local cultures, and redone in new and massively creative ways. It’s a fun show, but also smart, covering the music business as well.  There's not much else like this out there, and they’ve been doing this for 26 years. Radio still gets its due with Peabody, but we perhaps don’t recognize music within the medium as much as I’d like.

I felt like we had a really good selection of children's programming and a lot to choose from.  The two that we gave awards to (Doc McStuffins and Adventure Time) are enormously popular, but also stimulating and educational for children. Doc McStuffins is about a young African-American girl who has taken on the role of a professional veterinarian.  It really is that kind of role modeling and representation that we think is important for young people, in general, not just African-American kids, to have.

In education, we gave an award to COSMOS.  Neil deGrasse Tyson is really making an assertion for science when one of our two major political parties is really arguing against the value of and belief in the scientific method.  I think Neil has moved to the forefront (with Bill Nye) in making the case for why science matters in a time when it's easy for politicians to pander to the opposite.

GC: There are a lot of changes in store for Peabody this year.  Can you give us an idea of what to expect?

JJ: We've undergone a new branding campaign.  We have been working with a company out of California name LoyalKaspar. We will be unveiling our new logo, tagline, and brand positioning all at the ceremony this year.  This is part of the overall “coming-out” efforts that have been underway here for the last two years.  We’re offering a fresher, more modern look, but still classic.

It is time for a refresh.  Pretty much everything with Peabody is a refresh. We have used the same (ceremony) set for 16 years and the same venue for 22 years.  Thus, you are going to see a different set and a different feel by being a nighttime show.  We have a red carpet this year; we’ve never done that. I think it may add a little glitz and sparkle. It certainly adds publicity, but also adds a level of fun. By doing the show in the evening, doing the red carpet, creating a new set, I think it's just adding more fun to what is already a special event, because everyone in the room is already a winner. They are already there celebrating each other, so let's ramp it up a notch. It’s also making it a little more of an industry event, not just the news industry but the entertainment industry, too.

Plans for the 75th anniversary next year are being finalized and will be reviewed with the Board of Advisors when they meet next on May 31st, the morning of the ceremony.  Their advice and leadership will help instruct what types of activities we undertake in our 75th year to celebrate.

GC: As you move to a Sunday evening awards show this year, do you ever predict a time when you will announce the winners live like the Emmys?

JJ: No.  We’re a very different type of show.  The Emmys are a typical awards show, a model that Hollywood employs that, frankly, I don't value very much.  I am happy for the winners, but that is a ceremony that is all about being a television show first and foremost, perhaps at the expense of other things to be celebrated. I think what Peabody offers is that we aren't trying to recognize individuals; we are trying to recognize the stories themselves.  Not even the producers of the stories, but the stories themselves.  It's important that winners know in advance so that they come to the show and are prepared to discuss their story and why it matters.  Our show is a celebration of that. I think we did a really good job of that last year, and that's what makes Peabody different.  It's about the story, not the reveal, not the clothes. I wouldn't want to change that.

The television show we produce, thus, is also a horse of a different color, if you will.  It's a documentary of the ceremony, and includes interviews with the winners as they discuss why their story matters.  Peabody honors the most important stories in a given year and that's what we really want to celebrate.