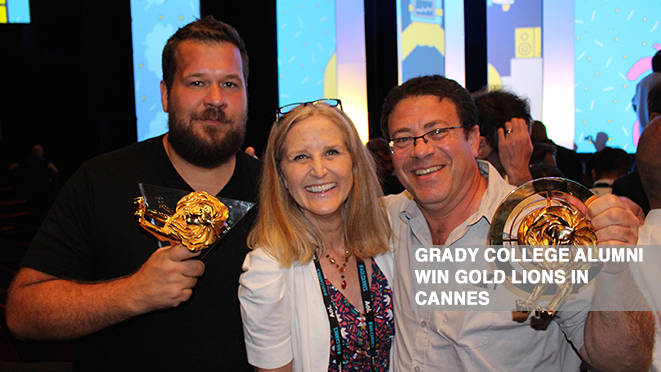 Kreher, a creative director for Wieden+Kennedy, received a Gold Lion in the Cyber category for a project with Verizon that created a cell phone built in Minecraft. Kat, the communication planning director for Mediacom in Israel, won in the Media Category for pairing Passover kits with Head and Shoulders dandruff testing strips.

“Beyond anything else that we do, we are in the business of coming up with great creative ideas that build brands,” said Kat of his award. Winning a gold in the most prestigious award competition is kind of a reassurance that we are doing something right after all. We have managed to seamlessly immerse a commercial brand in culture. From a media perspective, the category we won in, this was the first brand communication ever to be featured in synagogues, and media firsts, when done well, are always a jury favorite.”

Kreher agrees that it is the novel concepts that garner the most attention.

“The Verizon Minecraft project was just a group of really smart people trying something for the first time,” Kreher said. “We liked this idea because it made sense for Verizon, but also gave gamers something to enjoy that they could potentially find useful. So much of advertising is interruptive, so maybe this stood out because it wasn’t a message being crammed in your face.”

The Cannes Lions International Festival of Creativity is an eight-day celebration of creativity, inspiration, education and networking of creative professionals from around the world. The Lions awards take place at the conclusion of the festival and are presented in 23 categories. More than 40,000 submissions were reviewed by a panel of judges.

“In a lot of ways, the judging on this is more similar to the Peabody Awards in that there is a panel of top-flight professionals who make the decisions on awards,” said Karen King, professor of advertising in the Department of Advertising and Public Relations and one of Kat’s instructors when he was working on his Ph.D. “However, this is very much more a global competition.”

King and Tom Reichert, head of the Department of Advertising and Public Relations, were in the audience when Kreher and Kat won their awards.

“These are the most prestigious awards…at a global level…in the brand communication arena,” Reichert said. “They are on a similar level as an Oscar or Grammy.”

Kat, whose Mediacom agency won a Media Lions Grand Prix in 2005 for a Biomat laundry detergent campaign, credits his time at Grady College for helping him to get to where he is today.

“Grady was the place where I fell in love with the media side of the advertising business when Dr. King asked me to teach the undergraduate intro media class as her assistant,” Kat said.

Kreher, who has won 12 Lions over the years, including Gold Lions the past two years, says that journalistic integrity is one of the most important lessons learned during his Grady College education.

“I think all advertisers could benefit from the journalistic principles of research, honesty and clarity,” Kreher explained. “That was a big part of my Grady education and I try to keep it in mind every time I work on a project.”

Although Kat admits to the fact that despite the radically different landscape advertising is today compared to when he started in the field, he says there are several fundamental values that help today’s students succeed in the industry.

“Big data and the shift towards automated/programmatic distribution of content means that you need to constantly familiarize yourself with the latest communication tech, keep curious and up-to-date as it keeps changing and developing. But beyond anything else, we are in the business of creativity. Make sure you open your mind to new ideas by listening to interesting people, traveling, reading, appreciating music and going to plays/movies. This will surely create fertile ground for your future Eureka moment.”