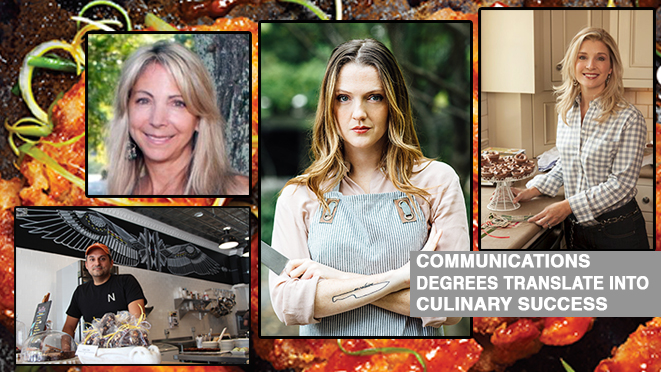 Food comforts. Food inspires. Food communicates. Food, the tie that binds, is probably why so many graduates from the University of Georgia Grady College of Journalism and Mass Communication go on to discover their recipe for success is in the culinary industry.

Four Grady alumni talked recently about how they got their start, what skills they learned at Grady that still help them and why the food culture is so strong today. Special thanks to the following professionals for sharing their thoughts:

• Peter Dale (ABJ ’99), chef, and an owner of several powerhouse culinary venues in Athens, Georgia, including The National, Seabear Oyster Bar and Condor Chocolates. He also serves on the Grady Alumni Society Board;

• Rebecca Lang, (ABJ '99) a contributing editor for Southern Living and author of several cookbooks including the recently-released “Fried Chicken”; and

• Melissa Libby (ABJ ’85), who has helped open more than 300 restaurants through her agency, Melissa Libby & Associates, which specializes in culinary media in Atlanta and throughout the country. She has also authored two cookbooks, including “Atlanta Cooks at Home” and she serves on the Grady Board of Trust.

Starting out at Grady College

The popularity of food and food journalism is a relatively new phenomenon. Dale, who was a public relations major, started off in a career in Washington, D.C., until he realized that his creativity wasn’t used to its full extent. Libby, also a public relations major, always knew she wanted to own a business, but never dreamed in college that it would involve culinary pursuits. And, Cauvel, who majored in advertising and is a creative director for MRY in New York, didn’t start cooking until she moved into her own apartment and started experimenting.

Lang, however, was already trying to figure out how to make her favorite hobby a potential career while a student in magazine studies at Grady College.

“I remember sitting in Professor Conrad Fink's class and he was going around asking everyone in the class 'what do you want to write about,’” Lang said. “Several people wanted to be war reporters. Several people wanted to be reporters for news agencies in Washington, D.C. He comes to me and I said, 'I want to write about food.' I remember him having this huge smirk on his face, because then food writing wasn't cool and not many people were doing it.”

Similarities between cooking and communications

Two of the most cited similarities between a career in culinary and a Grady College education are creativity and storytelling.

“Food is telling a story,” explained Dale. “It is personal, if it is told with heart and passion.”

Dale, who grew up in Athens and remembers watching Hershel Walker play football and learning to swim in old Stegeman Hall when that name was associated with a pool, did a lot of international traveling growing up. He likes to tap into his travel experiences through his food, whether it’s exploring his mother’s roots in Ecuador through the cacao beans they use for chocolates at Condor, or through cooking techniques he learned in Spain.

“I am inspired by travel and it has allowed me to bring my experiences and my ideas back home,” Dale said.

Crafting messages and storytelling plays a major role in Libby’s work, as well.

“We tell stories every day about our clients and their inspiration and their history and why they are doing what they're doing, but I also see among my clients a lot of storytellers. It's a very interesting type of person who is attracted to this industry. They tend to be a very creative group of people, and so storytelling comes very naturally to them.”

An education in any communications field is versatile, teaching not only practical skills like writing and public relations, but also life skills of perseverance and hard work.

“One of the great things about Grady is that it is really a school that encourages individual learning and pursuing things on your own,” Cauvel said. “There is not a lot of hand-holding, which is really great. There is not a lot of hand-holding in the culinary world, either, so I think the skills of being able to forge your own path and work independently and creatively is something that has really taken me a long way.”

“I think what I learned at Grady was to be curious, to look for opportunities when maybe it seemed that there weren't any,” Libby said. “A PR education, in my opinion, is also an entrepreneurial education. I think that pitching stories and seeking opportunities like you do in PR is the same as you do in owning a business.”

For Dale, his media, writing and public relations education has repeatedly come in handy.

“Chefs have to be present in communication,” Dale said. “Most small, independent restaurants like ours don’t have a lot of money to spend on advertising so they have to pitch a lot through public relations. I do a lot of interviews and my education also taught me to know the intent of the writer.”

There is little doubt that the culinary industry has exploded recently with the proliferation of cable television channels, online cooking resources, competitions and celebrity chefs. Even South by Southwest, the venerable music and interactive technology summit in Austin each spring, has several sessions devoted to culinary pursuits as outlined in a MRY blog post entitled “The Connected Table,” written by Cauvel.

“I think food has sort of transcended just being something that is needed as a basic tool of survival, but has become something that people want to really know about,” Cauvel explained. “I have started to see food as something that is a tool of unification that brings people together, and that is what I think is really powerful. People kind of let their walls down around the table in a way that I think is really inspiring. And, that is what is ultimately at the heart of food and technology. It’s this idea of bringing people together and getting like-minded people or really different people around this common human experience, which is sharing a meal.”

Social media has a vital communications role in all the culinary fields, too.

Most importantly, food is the tie that binds through shared experiences.

“We have this soulful connection with our food and no matter where you grew up, you have food in your past and food in your memory that connects you to times and places and events and wonderful things that happen,” concluded Lang. “To be able to get paid to write about and share something you love so dearly is wonderful. It's really the same way with food journalism. You are creating something that someone else can read and enjoy and relate to, and it’s something that is such a personal thing. People connect with that. A lot of time I don't feel like I am working but that I am playing in my hobby, which is a great blessing to have.