Brands and organizations want to attract consumers and gain their trust. Accomplishing both of these tasks, though, is no easy feat. Two factors that greatly impact the attractiveness of advertisements and consumer trust are the personalization of advertisements — adding names and images to ads, for example — and disclosing if and how an advertisement, whether its an image, video or user review, may be manipulated or influenced by a brand.

In this episode, Dr. Alexander Pfeuffer, an assistant professor of advertising in the Department of Advertising and Public Relations at Grady College, speaks about his research addressing those very topics.

Below is a transcript of the episode, edited for clarity and brevity.

Grady Research Radio: To start, I want to ask you a little bit about your recent research work. I know you recently worked on a study for the Journal of Interactive Advertising that evaluated the effectiveness of personalized recruitment ads. Can you walk me through that study — what you were seeking to learn and what you found?

Alexander Pfeuffer: Yes. So this is a study that was led by Jean Pfiffelmann at EM Strasbourg Business School. The study aimed to address the challenge of organizations recruiting new talent to replace retiring workers. 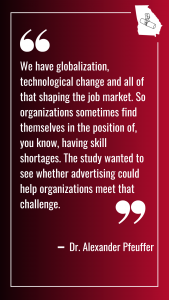 We have globalization, technological change and all of that shaping the job market. So organizations sometimes find themselves in the position of, you know, having skill shortages. The study wanted to see whether advertising could help organizations meet that challenge.

What we found was actually pretty cool. In the recruitment ad context, we found that personalization could be beneficial to organizations. When an organization addresses potential employees on social media by using both their image and name, they feel treated more considerately. They perceive that organization as more attractive, and they were much more likely to subsequently want to pursue that job or to click on the ad and learn more about the organization. That strategy worked specifically for individuals who perceived the message as less relevant to them on the outset.

Grady Research Radio: Great. So were those the results that you expected to find in your hypothesis for this study, or were you surprised by those results in any way?

Alexander Pfeuffer: I think from the existing literature, we thought that maybe using a name of a person was enough personalization. We thought that using images might be perceived as being too intrusive.

But we saw that using just the name actually was not effective. I don’t know if that has to do with the context of it being recruitment ads or if it has to do with, you know  — personalized names have been used a lot in email marketing and in commercial ads. Maybe the effects of that, which have previously shown to be effective, may no longer be novel and may no longer exert that effect.

So we saw that it really took the name and the image of that person to have that effect. And it needs to be someone who wasn’t really that involved with a message to begin with.

Grady Research Radio: Backing up a little bit, can you give a more holistic introduction to your research  —  what the majority of it focuses on?

Alexander Pfeuffer: My research focuses on digital advertising effects, broadly. I look at that through a lens of consumer protection and empowerment, and I explore effects that focus on theories of persuasion and the construct of trust.

So the majority of my research has focused on approaches of ensuring that consumers are informed about the persuasive nature of their content and how that empowerment influences advertising effects.

Grady Research Radio: Great. So, reading through a little bit of your research, I noticed there seems to be this overlying trend that transparency is often a good idea for marketers in terms of boosting consumer trust. So, is this true? Can you explain where it is true and why that might be?

Alexander Pfeuffer: I’ve looked at a variety of disclosure messages that aim at making sure that consumers are informed. Originally, I started looking at that in the sponsorship disclosure context, and I found that consumer responses to those disclosures were nuanced.

So, in terms of the effects that we see, it matters what type of sponsorship was entered — what sort of deal was entered and was disclosed. We saw that, for sponsorship, consumers were much more likely to accept a message that was sponsored by the reviewer receiving a free product, as opposed to receiving payments or a commission.

I think the interesting bit was that we saw that the free product sponsorship was statistically equivalent to a review that ostensibly was not sponsored and didn’t have a disclosure at all.

Grady Research Radio: Okay, great. So this might be asking you to speculate slightly, but are there any instances where a marketer or brand can be too transparent — where transparency can hurt them or their brand?

Alexander Pfeuffer: In the context of my research, we’ve seen that being more forthcoming was of benefit to brands. So, giving that additional information instead of just a general disclosure was more accepted by consumers.

(Consumers) are actually somewhat cynical or suspicious of more general disclosures that simply thank the brand for making something possible, versus saying specifically what they received in return.

Grady Research Radio: In that regard, do you believe that this is a trend that will continue? Will consumers continue or increasingly want to see specifics in disclosure messages, rather than the general disclosure messages such as, as you mentioned, thanking a brand for making something possible.

Alexander Pfeuffer: I think it’s a trend that we’ll see in different contexts as well. I’ve expanded my research to looking into disclosures in the context of image manipulation. So we’re seeing that there are certain countries that are already putting requirements in place that photoshopping would need to be disclosed.

We actually just presented a study at an international advertising conference in Europe, in Prague, that focused specifically on that. In that case, we were less concerned with, you know, how that would affect the effectiveness of the ad and more interested in, can we mitigate potentially harmful effects of image manipulation, which has been linked to issues of mental health and negatively affecting beauty standards.

We saw that those disclosures, and specifically if they are more detailed, through different mechanisms, have the potential to reduce some of those negative effects, particularly in terms of the extent to which we compare our own bodies to maybe unrealistic depictions of human proportions that are often depicted in those social media posts.

Grady Research Radio: Following up on that — if governments start to mandate that you have to disclose the information that this image has been manipulated, do you think that image manipulation will continue at the same rate that it might be at right now?

Alexander Pfeuffer: I will have to speculate. I don’t have the data on that. But those limitations apply to sponsored content specifically. We also saw that those disclosures had some negative effects on how consumers perceived brands and also content creators.

So, I would think that it could be beneficial to brands to have less retouched images. We’ve seen brands already trying to show more realistic depictions in their ads, even outside of the social media space.

Grady Research Radio: Now moving forward — what’s next for your research? Is there anything that you’re working on right now or in the near future that you’re particularly excited about?

Alexander Pfeuffer: Yeah, so as an extension of the research that I just talked about with image retouching, we’re also looking at CGI influencers and how disclosing to consumers that an influencer that they’re seeing is actually computer-generated might affect how they perceive the brand, how they perceive that content creator, and how much they would be willing to rely on that information.

So that’s research that’s going on right now. I’m working on that together with Haley Hatfield and Jooyoung Kim, and Nate Evans was also part of the image retouching project. We’re going to be presenting that at the American Academy of Advertising conference in Denver next March.

And then another thing going on is — so one of my research lines has been striving to apply marketing principles and my interest in trust in the context of health and sustainability. So, an ongoing project right now, which was actually funded by the American Academy of Advertising and also by the Coleman Group, which is a consulting firm in Atlanta, looks at the role of trust in social media content about the Covid-19 vaccine.

Essentially, we’ve seen a lot of content come out, be it from institutions and organizations, but also from fellow social media users about their personal accounts and personal experiences with (the Covid-19 vaccine).

We’re interested in seeing, what are the content attributes? So — what are specific aspects of the content that would let audiences generate an initial level of trust so that in a polarizing context we can get to a point where we have a base level of trust so we can engage with the information rather than outright rejecting it before evaluating it in the first place.

Alexander Pfeuffer: Thank you so much for having me.

Research analyzes spread of COVID-19’s most common early conspiracies
The early stages of the pandemic created a breeding ground for COVID-19 conspiracy theories, which, on Twitter, spread almost as fast as the virus itself. But out of the pandemic’s […]
learn more

Capstone AdPR students boost brand of local BBQ sauce
They fit together like BBQ sauce and a pulled pork sandwich.  When Kim Landrum, a senior lecturer in the Advertising and Public Relations (AdPR) Department at Grady College, reached out […]
learn more

UGA Mentor Program Profile: Rylee Barfield and LeLoni Smith
It didn’t take long for recent graduate Rylee Barfield (AB ‘22) to experience the value of a good mentor. During her first week at UGA, eager to enter the field […]
learn more