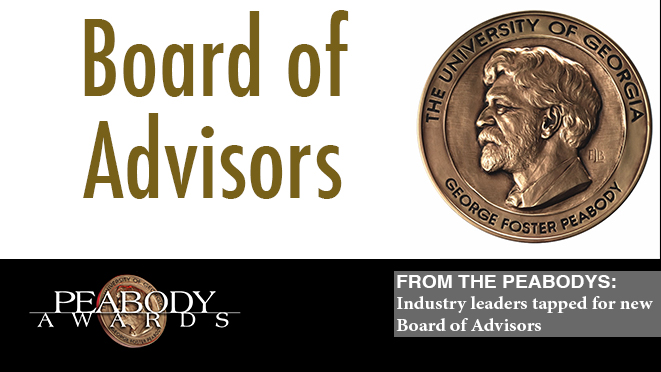 The University of Georgia’s George Foster Peabody Awards has created its first ever Board of Advisors, consisting of prominent entertainment and media industry leaders who will provide guidance and support to the Peabody program’s future initiatives, it was announced today by Dr. Jeffrey P. Jones, Peabody Director. The Board of Advisors will be distinct and separate from the Peabodys’ traditional Board of Jurors that each year evaluates entries and bestows the prestigious Awards for excellence in electronic media.

The 24 Board of Advisor members will provide counsel to Jones and his staff.  In conjunction with the formation of the Board, five committees have been established: Branding and Mission; the Peabody Archives and Endowments; Original Content and Programming; Internationalization; and Events (including the Awards Show and 75th Anniversary Celebration).  Members of the Board will sit on the various committees.

“When I was selected as Director of the Peabody Awards, I recognized a need to align our organization more closely with the extraordinarily experienced and talented leadership of the entertainment and media worlds,” Jones said.  “They have resources and knowledge that will help us realize the exciting plans we have for Peabody. I am deeply appreciative of their desire to serve our organization and contribute their valuable time and insight.”

The members of the Board of Advisors in alphabetical order are:

The Peabody Awards, the oldest in electronic media, are considered among the most prestigious and selective prizes. The Peabodys recognize excellence and meritorious work by radio and television stations, networks, webcasters, producing organizations and individuals. The 18-member Peabody Board of Jurors is a distinguished panel of television critics, industry practitioners, scholars and experts in culture and the arts. Selection is made by the Board following review by special screening committees of media experts at UGA and other universities around the country.  For more information regarding the Peabody Awards program, visit www.peabodyawards.com or follow @Peabody_ Awards on Twitter.