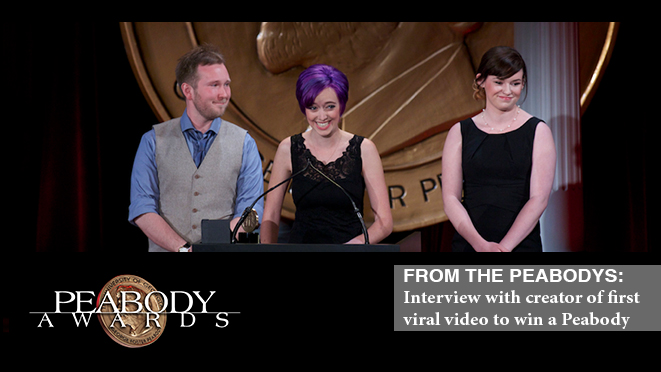 The following is a blog post printed by permission from the Peabody Awards website. Please see their blog for a complete transcript of the Sam Stendal interview.

Less than a week — that's how long it took Sam Stendal and Aaron Blanton to put together the 26-second YouTube video “A Needed Response.” That video went viral, created a conversation around sexual assault and went on to win a Peabody Award.

“When we originally made the video, we didn't think it was going to be that controversial,” Stendal said. “I think that was the big thing. And it wasn't when we first posted it. And then, all of a sudden, all of the comments started trickling in, like 'Well, you know she deserves it if she's passed out.' And, all of these other commenters condoning rape.”

Early commenters who thought the video's message was common sense realized that not everybody felt the same way about rape as they did.

“All of a sudden these people that were saying, 'What's the big deal?' are saying 'Oh, there are people out here that believe that this is okay,'” Stendal said.

The video got the attention of the Peabody judges, who said that it won “for making [an] unforgettable, undeniable statement about rape culture and sharing it with the world via social media.”

Stendal said she was originally hesitant to submit the video because the Peabody Awards were so big in her mind, but Blanton finally convinced her and was actually the one who gave her the good news.

“He called me early in the morning when I was still sleeping, and I remember I picked up the phone and I told him, 'You better tell me something good because you woke me up,”' Stendal said. “And he told me about the Peabody Award, and I immediately woke up. I freaked out with him and we were both really, really excited. It was a really cool moment for both of us.”

The win was not the first in the family. The initial idea to submit came from Stendal's dad, Mark Stendal, who is a Peabody winner himself as an executive producer for War on Children in 1996. Stendal said that in comparison to his documentary, “A Needed Response” took so much less time.

“So many other pieces that win Peabody Awards, you know, there's years of preparation for the pieces that win them, and there [are] so many crews behind them, so much work behind them. I think we kind of got lucky with ours,” she said.

Since the Peabody win almost a year ago, the first for a YouTube video, Stendal said her life “has been a little weird, but in a good way.” She's gone through a flurry of press attention, the latest being her feature in Glamour Magazine's recent article “Hometown Heroes: 50 Phenomenal Women of the Year Who Are Making a Difference,” representing Oregon.

Stendal is currently working on a piece for a class that focuses on man-on-man violence, but she hopes it will turn into something bigger. With graduation approaching, Stendal said she aspires to work in an art department in Los Angeles but continue to work on her projects on the side.