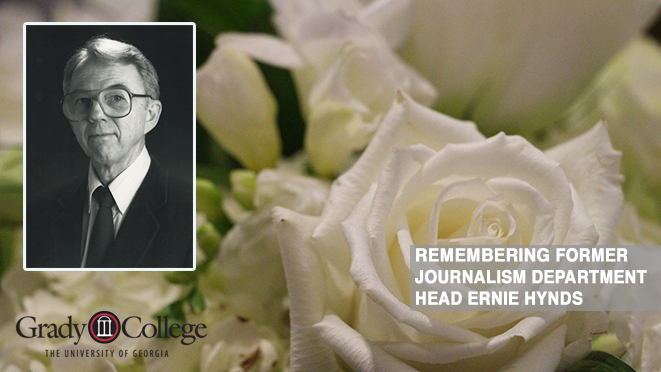 “He was genuinely a good person,” said Barry Hollander, a journalism professor at Grady College, of Ernie Hynds.

This sentiment was shared by many about Hynds, who passed away Aug. 17, 2015. Hynds worked for 43 years at Grady College, including more than a decade as the head of the Department of Journalism.

Professor Kent Middleton, who succeeded Hynds as head of the Department of Journalism from 1999 to 2013, said Hynds was a beloved teacher, noted media historian, authority on contemporary magazines and respected administrator. “Hynds' love of journalism and its rich history inspired generations of students,” Middleton said.

Several current Grady faculty members had Hynds for a professor including Keith Herndon, who took his contemporary American newspaper class, and Diane Murray and Kristen Smith, who took his history of magazines class.

“I was lucky enough to have Dr. Hynds as a professor,” Smith said. “I loved that class. He was always willing to talk to students about their work and share ideas.”

Charles Davis, dean of Grady College, has fond memories of Hynds, too. “I recall many pleasant interactions with Dr. Hynds, who was a true Southern gentleman of the highest order. Unfailingly kind and polite, he was a cornerstone figure at Grady for decades.”

Hollander, who was hired by Hynds, added that when Hynds was department head, he focused on what the faculty needed.

“He worked hard to make sure everyone was happy,” Hollander said. “The number one job of a department head is to give the faculty what they need and get out of the way. He did that well.”

Excerpts from the obituary for Ernie Hynds published in the Athens Banner-Herald include the following:

Dr. Hynds was born Oct. 10, 1930, in Atlanta, Ga., to Ernest Culloden and Ethel Conley Hynds. He attended public schools in Atlanta, graduating from Murphy High in 1948. He earned a Bachelor of Arts degree from Emory University with a major in journalism and a minor in political science. At the University of Georgia, he earned a Master of Arts degree with a major in political science and a minor in journalism, as well as a Doctorate in history. He was a member of Phi Beta Kappa along with several other honor societies. Dr. Hynds also served in the Army from 1952 to 1954.

Dr. Hynds had a fulfilling career in journalism, working for the Atlanta Journal-Constitution and WSB Radio in Atlanta, before joining the faculty of the Henry W. Grady College of Journalism and Mass Communications at the University of Georgia. An emeritus professor, he retired in 1999 after 43 years at the College, which included more than a decade as a department head. He also worked part-time as an editorial writer for the Athens Banner-Herald, earning several awards for the newspaper.

Dr. Hynds has authored several books, including Antebellum Athens and Clarke County, a history of the Athens community prior to the Civil War; American Newspapers in the 1970s, and a sequel, American Newspapers in the 1980s. More recently, he wrote Always Becoming New, a history of the First Baptist Church of Athens, Ga. His latest work was a collection of devotionals entitled Celebrations and Challenges for Christians. It was written after his wife Mary Ann died from Alzheimer's in May of 2012. The two were married in June of 1953.